I took over care of a Japanese red pine in December of 2017 from a very good friend who had had the tree for many years. It is an old Koreshoff pine that was grown from seed planted in 1951. I have come across quite a few 1951 Koreshoff pines with a number living in Canberra at the National Collection.

More than a metre wide, the tree had been only mildly styled using guy wires to position branches to resemble the design from years ago. It was allowed to grow untouched, missing the decandle in early summer, to build strength. In late summer 2018 (February) I pruned it. As you can see in the photo before the workshop the tree had few interior branches to work, with foliage only at the tips. There were a lot of buds that you can’t see in the photo, resulting from the February prune.

I was fortunate to be nominated for a workshop at ’Bonsai Week’ in Canberra, held at the National Arboretum. Carlos van der Vaart, from Holland, was the visiting international artist. We came up with a plan and designed the tree and set to a few hours of raffia, wiring and bending. At one stage there were four of us wiring to get the tree done. The result was very good with a clear path moving forward. 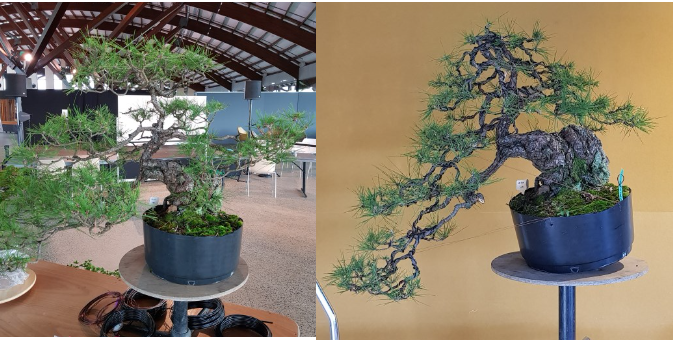 Red pine before and after work Bonsai Week 2018

The tree was allowed to recover for the remainder of 2018 and all of 2019 until decandling in December. The tree powered on after this until April of 2020 when I completely removed the wire, shoot selected and needle plucked.

In December 2020, the tree was decandled and needles plucked again and then in late July of this year, around two months behind schedule, it was brought into the studio for shoot selection, needle plucking and another round of wiring. Fourteen hours of work later and the tree was ready for repotting.

Repotting was interesting. This is a big tree and very heavy. It was still in the standard Koreshoff mix which is mostly blue metal. After removing the tree from the pot, the root mass wasn’t as healthy as I had hoped due to an ants’ nest. The lack of strong roots forced me to change my pot choice. Besides I realised that the chosen pot was too small. There’s nothing quite like having a 70 year old tree out of the pot and then realising it won’t fit in the new one! Another pot was chosen which is too big but will suffice. Of course, I needed an in-between size! Nonetheless, it does have a charm in the handmade Vietnamese pot, even if it is a little big. As this is a more traditionally shaped tree I will be looking for a Japanese pot in the future.

To aid it the root recovery I increased particle size and reduced the akadama ratio slightly, to increase the oxygen rate of the mix (substitute pine bark for akadama in an organic mix or just add more gravel). This will mean more watering to maintain moisture but a faster oxygen exchange will assist in the rebuilding of a strong and vigorous root system.

It has candled strongly post repot and is displaying a deep lustre to the needles. There are over 300 candles on the tree, and looking back at the photo from 2018, the tree has come a long way in only three years. The next job is to start fertilising and allow the tree to flush out, rebuilding the roots and energy. I look forward to the continued refinement of this magnificent tree. 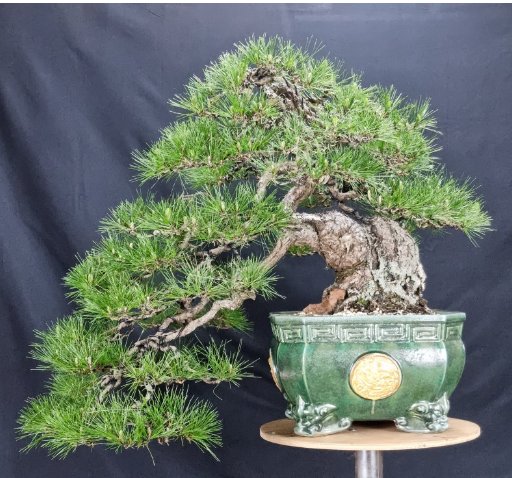