Our June meeting saw Michael Kempson explain how he works his junipers to achieve fantastic results. Bringing a record amount trees for any demonstration (all juniper), Michael had every base covered and showed his junipers’ development from fairly raw stock (albeit with excellent bones) to refined trees. It was an inspired way of showing the stages of a bonsai’s development over years in one night!

Just a few of the trees Michael brought to illustrate his talk.

In 1969, Michael (8 years old), was taken to the Adelaide Show and saw bonsai for the first time. To say it changed his life is probably an understatement, as here, started a lifelong passion. Michael started practising bonsai in the 90’s. Working with privets, Chinese elms and juniper and the support of a friend Michael had no formal bonsai training until 2016 when he joined the School of Bonsai, began engaging with clubs like BSA and doing workshops with people like Joe Morgan-Payler, Hugh Grant and Andrew Edge. Michael says this made a massive improvement to his practice as it is good to have knowledge reinforced from different perspectives and aesthetics.

Michael has had the tree below since 2017. Initially, it had a long tail and was under-wired. As was convention, Michael pinched and pinched and pinched to develop the tree, but didn’t go anywhere. He made the first branch on the right into a cascade and pinched some more. The branch died. Horticulturally, things were not right, so he reduced the pot size to get the water/oxygen balance right, going straight to the desired pot size and revised constant pinching. As you can see the tree is now thriving.

Initially, Michael didn’t have the horticultural side of things completely under control and overwatered ‘killing with kindness’ some of his collection. He stresses the importance of understanding your microclimate and having the correct horticultural knowledge to get the best results. 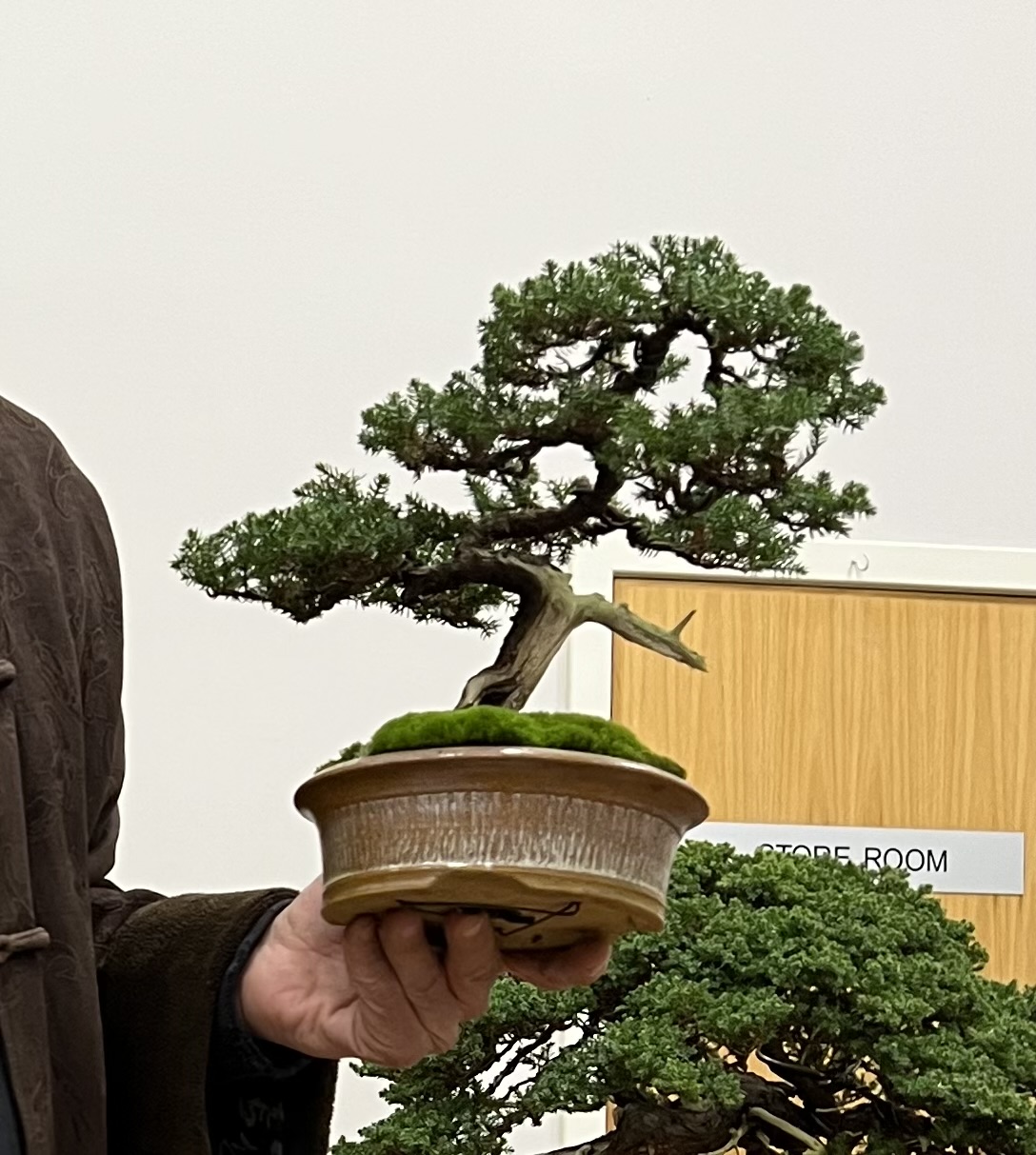 Same tree in a small pot with the water and oxygen balance right, it hasn’t looked back.

A couple of years ago, Michael bought a collection of neglected junipers to develop his skills and artistic practice. He began developing some of these in the first year, some more the second year and some more again the third year. Each of these is worked regularly. Michael brought several trees in various stages of development to the meeting to illustrate his process and progression of these trees.
Michael begins by cleaning the tree out. This is a ritual that allows Michael to know the tree. He tempers his design decisions with the horticultural aspects of each tree, taking into account the features and flaws before making any decisions. Initially, he removes any weak or unviable branches. He leaves some branches for jins, which he strips immediately as the bark comes off easily while the sap is still flowing. The branches are tipped to encourage the tree’s energy to go into back budding rather growth at the tips. Back budding is the future of the tree. Michael does not do heavy structural work now. 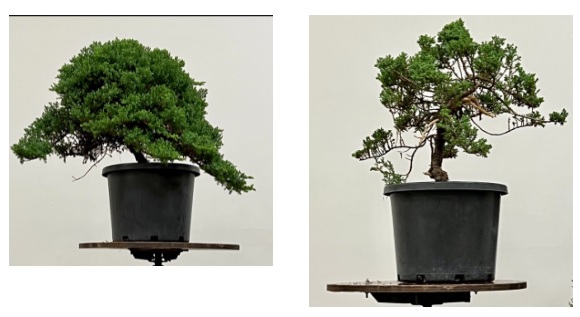 This work is best commenced in late summer or autumn as it gives the tree time to recover before winter. During the spring, the tree’s growing season, the bark is very fragile and if wired the there is a risk of stripping the bark off. The tree on the right above was cleaned out a few months ago.

Michael is comfortable with taking visual risks, aesthetics and creativity are his ‘bread and butter’. He likes the dialogue between live and dead tissue and is happy to create it, so if a tree has good movement and good branches he feels you don’t need many branches, but you do need jins as they convey the idea of age in a miniature tree. 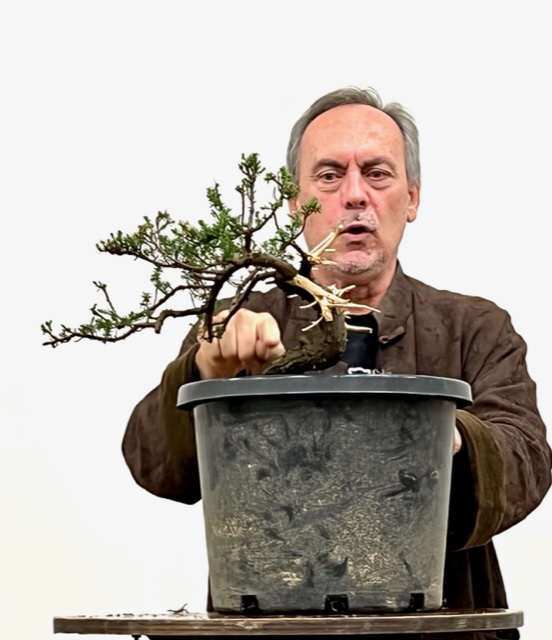 At this stage, Michael deals with the deadwood using lime sulphur to harden and protect it. This is crucial for jins and needs to be done a couple times per the growing season; the more it’s done, the better the preservation. Firstly, the deadwood is thoroughly cleaned with a toothbrush and water. Then one application only, of non-diluted lime sulphur, is then painted onto the deadwood while it is still wet but not saturated- about when the gloss of the water comes off. Care must be taken to control where the lime sulphur goes. At this stage, the lime sulphur looks very yellow but it will dry to white. White is good for junipers but for trees like olives or natives, 1-2 drops of Japanese ink (sumi ink) can be added to the lime sulphur to make the deadwood appear darker.

Junipers allow lots of different style options but the design needs to support the assets of the tree and this directs which branches stay. This is the point when Michael wires the tree. 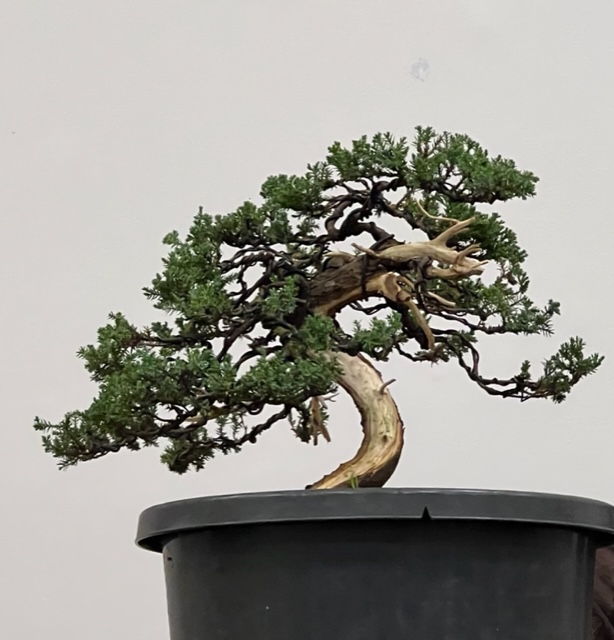 Eventually, Michael will put the tree into a bonsai pot but not at the same time as styling as this is too stressful for the tree. He might wait wait one or two seasons until the tree is really firing before doing this. Michael always pots into the container he wants the tree to stay in- he doesn’t pot down. The only reasons for Michael to repot are: 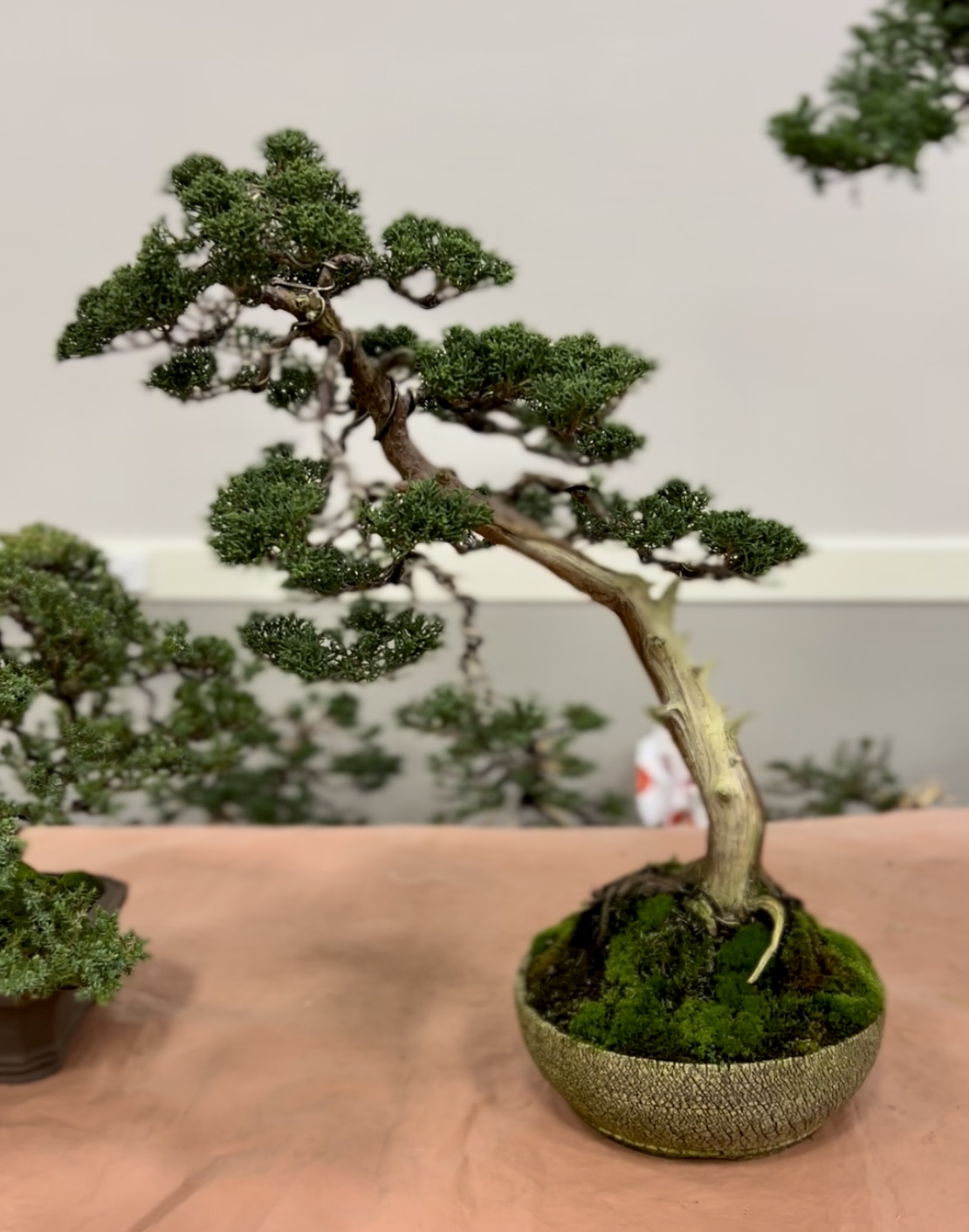 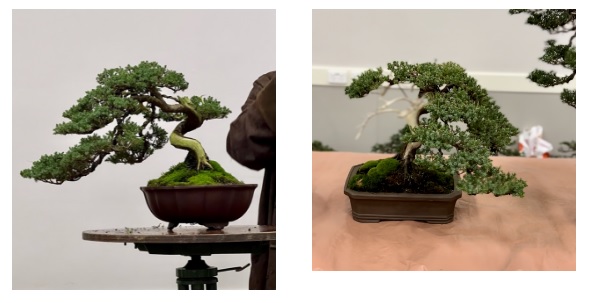 So several years of juniper styling covered in a few hours- what a lot there was to learn!