Please note that photos are from the exhibition and descriptions are from the show catalogue that are used to illustrate Marcela’s points.

For many years Australian native species for bonsai were overlooked in favour of exotics and while some were experimenting with them, overall, most people believed that natives would not make good bonsai. However things have changed as this year’s AABC Convention ‘Australian Natives Breaking through the Bonsai Ceiling’ hosted by the Victorian Native Bonsai Club clearly proved.

Marcela was adamant that this was subjective and in her view very clearly wrong. The exhibition, both beautiful and exciting, proved this and those present certainly agreed with her. In terms of making good bonsai, natives are an excellent choice for several reasons- they are readily available, there is lots of choice and they grow fast. Natives can be wired easily into interesting bends and as they grow so quickly, wire cutting in is not such an issue as marks will grow over due to their rate of growth. 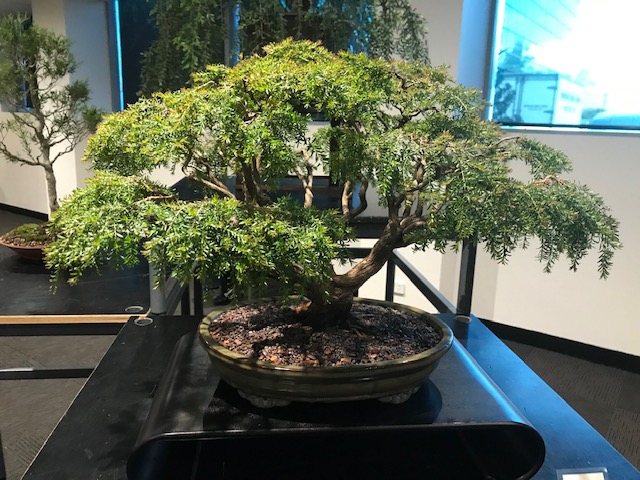 Bonsai need to be root pruned and natives, like all other bonsai, need root pruning. It can be done, just look around the exhibition- all the trees are in bonsai pots! Don’t be too worried about how much you take off but if you are worried be a bit conservative. 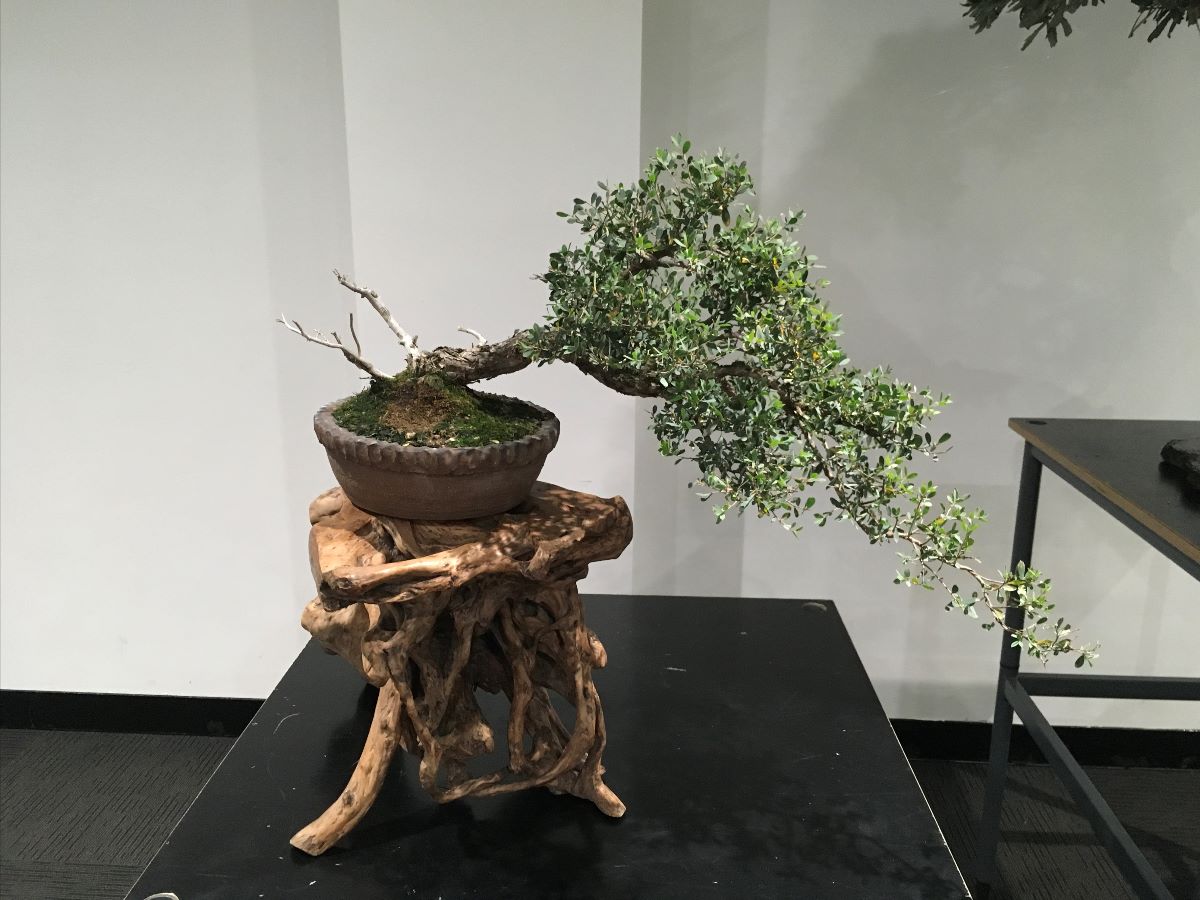 Leptospermum laevigatum
Coastal tea tree
The coastal tea tree was purchased as a stock tree from the Victorian Native Bonsai Show and was subsequently styled. The pot selected is from Adelaide Bonsai Pottery (South Australia).

Myth 3: Repot on the hottest day of the year

September to April is the safest time to repot natives but Marcela repots all year round and feels it makes no difference provided your aftercare is good. Having said that though, when Marcela is putting a tree into a bonsai pot she chooses the cooler months to do it. As far as the best time to dig goes, it’s when you get the chance!

Natives can be wired and are wired. Wire early and exaggerate the bends. Copper gives more holding power and therefore is a better choice. Observe trees in nature and see how they grow. Some species have drooping branches that turn up at the tips so these can be wired below the horizontal following nature’s lead. 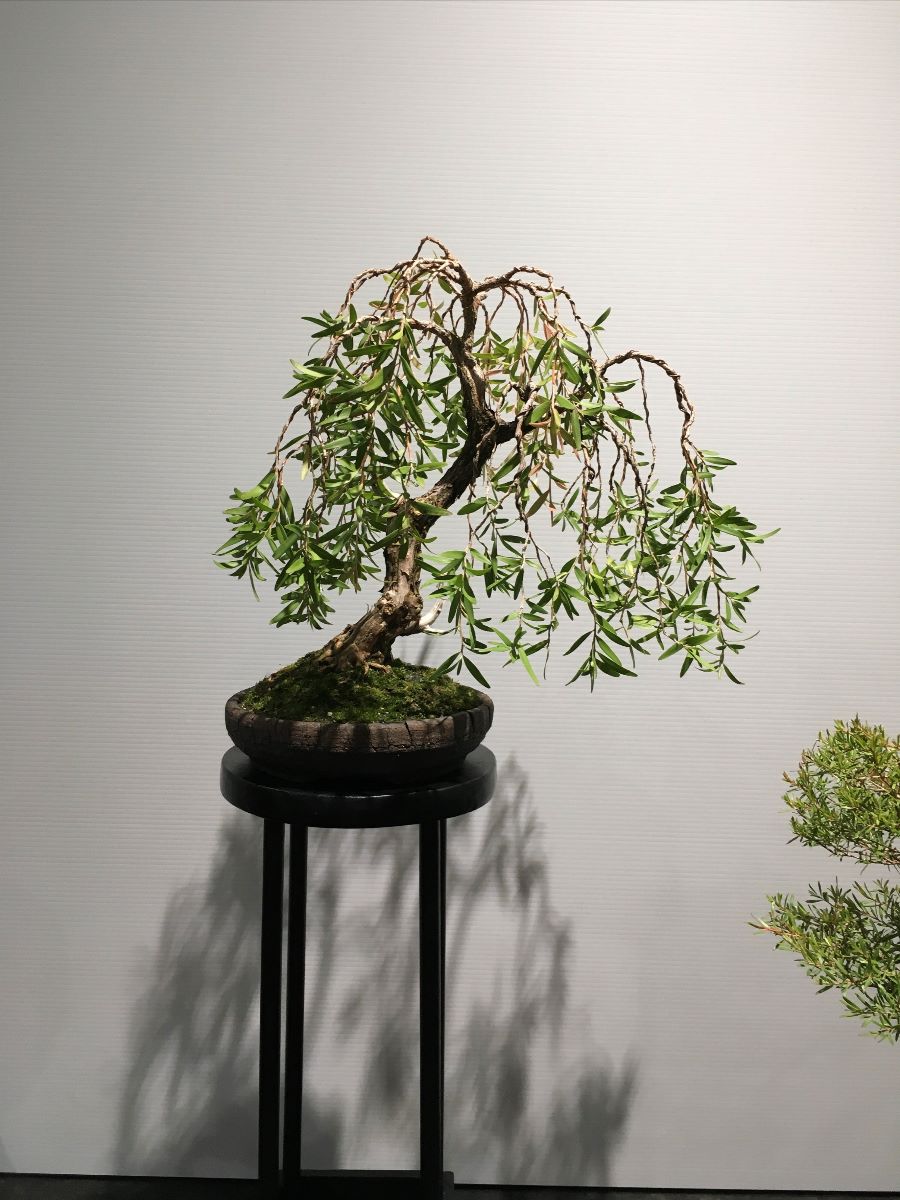 I purchased this tree at a presentation given to the VNBC mid 2018. An uncommon species, the tree has been grown from collected seed in Smoky Cape, NSW. At the time I purchased it (and possibly even until now) we were unsure of the species, but some serious sleuthing online led to me settling here. A naturally pendulous tree, it lends itself well to having its branches wired down in a weeping style. 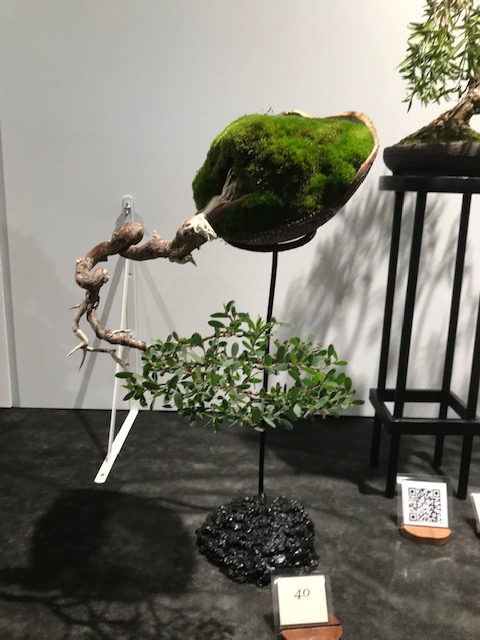 I purchased this tree at the 2018 AABC convention. The tree wasn’t originally intended as part of this display, but its rapid development saw it outshine the other contender for its spot. Originally grown as an upright tree, it was planted as displayed to maximise the movement and tension in the trunk line. The container was a thrift shop find, drilled out and repurposed for bonsai.

All plants (particularly plants in pots) need feeding and natives are no exception. However, they do need the correct type of fertiliser- one low in phosphorous. Alternate fertilisers for the best results. As far as water is concerned, it is a misconception that natives don’t need much. Some species like more, others like less so let your tree tell you when it needs water.

Many trees in the exhibition put this myth to rest- many are forty years and some are fifty or sixty years old. Marcela feels the care and attention given to bonsai extends their lifespan. Certainly, native trees should and will be passed on to their next caretaker. 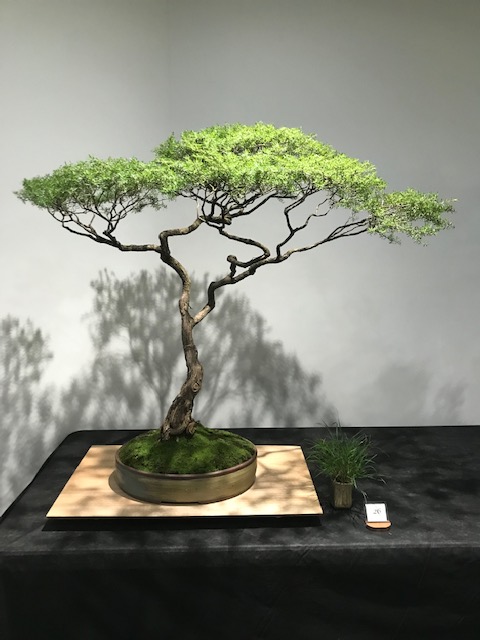 Grown from a nursery plant purchased in1983, this tree has transformed over time, through loss of lower branches and continuing development of the crown, from an ornamental pot plant to its current sinuous and shapely form. This form and the continuing crown movement inspired my own name for this tree- ‘Dancing in the Wind’. The tree flowers profusely in spring with a spectacular cover of small white flowers with a pink interior.

Marcela feels it’s ‘an old husband’s tale’ that any wound over 2mm should be sealed. She is time poor and prunes ‘as she goes’ and doesn’t seal as a result. Most natives (wattles, callitris etc.) have their own sealing properties.

Like all bonsai, natives can be styled. The aim is to make a native tree into something that looks like a bonsai but take your cue from nature and go from there. 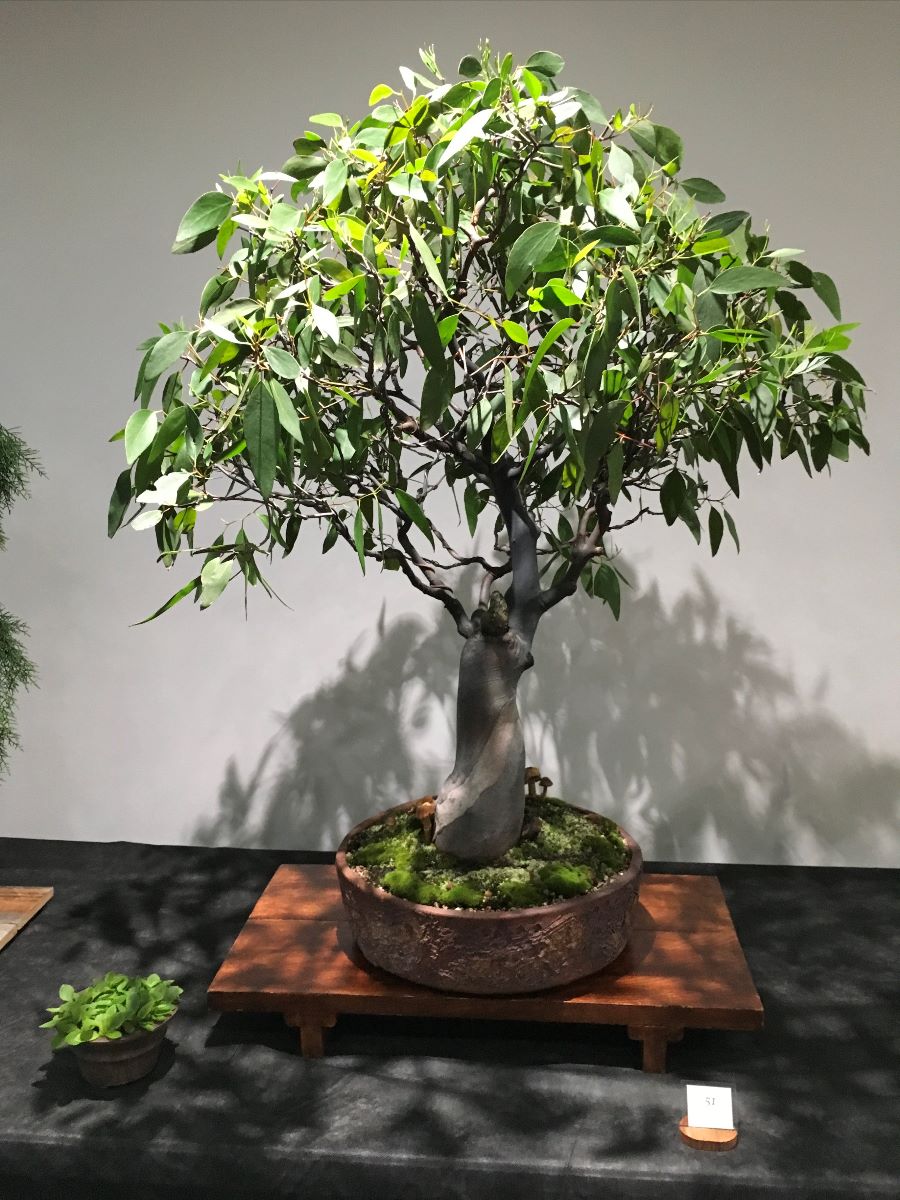 This tree was collected as a small seedling in the mid 1970s and has been pot grown since that time. The original top died and is present now as a stub of dead wood. In the wild, most Mountain Ash grow quite close together and grow to enormous heights. Indeed, they have in the past been recorded as the tallest trees in the world. Sadly, many of these giants have been felled. This bonsai probably doesn’t exhibit the normal proportions a Mountain Ash would show but those of you who have seen the Ada tree in East Gippsland may recognise some similarities. That tree was once extremely tall but a storm sometime in the past broke off the top of the tree so that now it is stockier than it once was. Like many eucalypts this tree is not easy to maintain as a bonsai and frequently needs a rethink on the design. The long mature crescent shaped leaves seen in the wild are difficult to achieve in a miniature tree. It does however shed its bark like its larger counterparts, usually a greater shedding occurring every second year.

4 thoughts on “Natives: Myths and Misconceptions of Australian Bonsai”