Apprentice bonsai can be a bit odd with the stylist seeing future growth but others seeing only what their eyes see and doubting any future. This little Kunzea ambigua is a great example. It was obviously older stock at a native nursery and priced at last year’s value. The trunk had some interest and I thought I could make it into a semi cascade.

First styling went a bit awry when I broke the young header shoot while wiring the left branch. BIG setback! But you go on with it and the good news is, that several new shoots have developed halfway up the apical trunk. Not high enough but still encouraging. 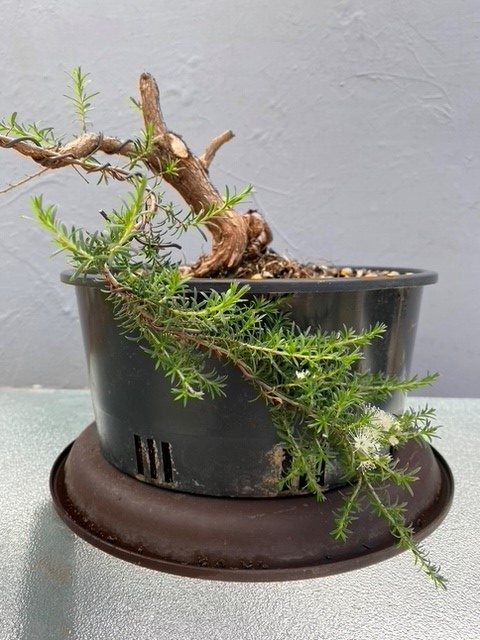 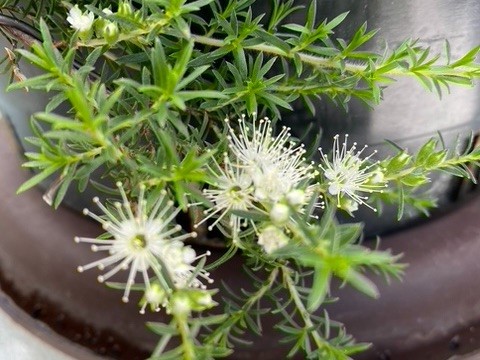 I went out one morning and was stunned to see flower buds and then, a day or so later, the flowers opened. What little gems these are. They definitely make the tree worth developing as the flowers are on branchlets but close to the main branch so pruning should not disturb them.

I am overjoyed because I have had a Kunzea ambigua since 2007 and it has developed into a stunning tree (so I think) but not to many other’s liking (I could hardly care less). But it has never flowered, not once. I do feel this mini semi cascade has a future and am more than happy to persevere with it while it develops from an apprentice to a bonsai.