Having seen a most beautiful elm with exposed roots at the recent AABC Convention (thought to be one of the best trees on display by Bjorn Bjorholm) the question of how one might achieve such a developed exposed root system for a semi cascade was something to investigate in the future but luckily, last month’s demonstration was all about exposed roots. Thank you Ray! 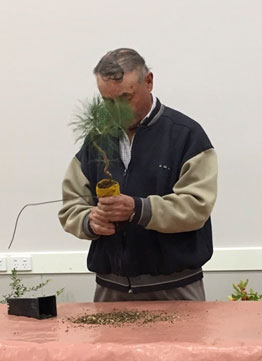 Ray brought three Japanese black pine examples with exposed roots that he had been working on for about 25 years. While they all had nicely aged bark, Ray had concentrated on root development and not really done anything with the foliage other than keeping it trimmed. Ray pointed out that the more foliage a plant has, the faster the roots develop. Refining was for ‘one day’ when he had the time! (And we think we have a problem with too many bonsai.) Ray now only uses black pines when developing trees with exposed roots but in the past he has experimented with pyracantha, cotoneaster, gardenia and elms, all of which worked well.

So, here is the process as demonstrated at the August meeting. Ray took a small black pine (about two years old) and removed it from its pot. He then wrapped the roots in fabric, leaving the bottom open so the roots could continue to grow downwards. Any fabric will do as its job is to protect the roots from sunburn. Ray wired around the fabric and up the pine’s trunk to finish. Next he held the fabric and tried to bend the roots in the cloth and the trunk to put some rough shape into them. Finally, he repotted it into a decent sized pot, ideally a tall one and instructed ‘wait, wait, wait!’ ‘No peeking’ and ignore it for at least two years and then you ’might have a look’ was Ray’s advice.

It is best to keep the roots covered for as long as possible as they will thicken more quickly if not exposed. Ideally you want the roots to be as thick as the trunk was when you started (i.e. finger thick). You can start to train the tree in 1-3 years but it is best left to develop the roots more. As it grows, shape it into a cascade, semi-cascade or informal upright. Keep an eye on the wire and change when necessary. Don’t forget to fertilise.