With boarders opened at last, there has been the opportunity to see interstate bonsai artists demonstrate again, even if there’s a bit of travel involved. Jarryd Bailey, from Montane Bonsai in Tasmania, has been a visiting demonstrator at both Bonsai Reshaped at the NBPCA and the Central Coast Bonsai Club. Jarryd is passionate about native species and particularly the old growth forest species that are found in Tasmania’s wilderness.

For the CCBC’s demonstration Jarryd worked on a lemon scented tea tree, Leptospermum petersonii, from Bonsai World at Jilliby. Even though Jarryd now lives in Tasmania, he grew up in NSW and is very familiar with the graceful, weeping habit of this thirsty, quick growing eastern Australian native. Lemon scented tea trees make good material for bonsai as they are an elegant and quick growing tree even if back budding is unreliable on shaded out areas.

To start Jarryd cleaned out the dead growth while familiarising himself with the tree. This tree has an open elegance about it with beautiful movement and lovely branching. Lemon scented tea trees not compact trees as they grow beneath the canopy of the forest and Jarryd sees this tree as a Sclerophyll style (term coined by Will Fletcher) based on Sclerophyll forests.

Next Jarryd ‘poked around’ the base of the tree to see what was there in the way of trunk and roots.He likes to use a chopstick and water (not possible here) as a gentle way of removing the soil. In this case ‘a lucky base’ was revealed. 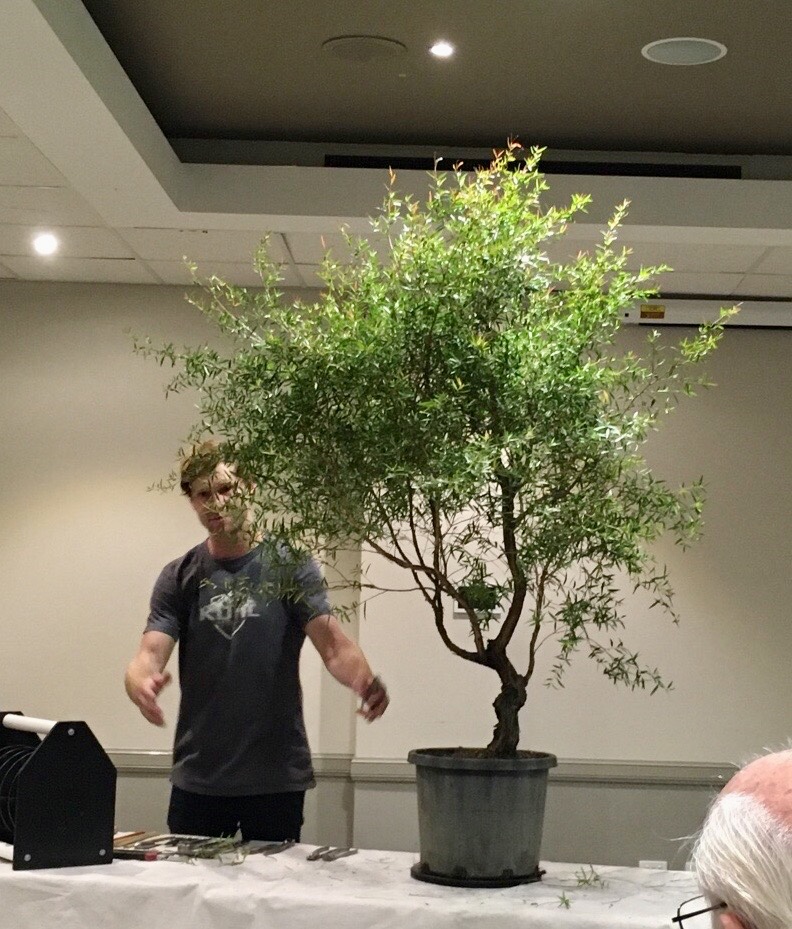 Jarryd starting off by digging around the roots.

Jarryd starts at the base of the tree and looks for where his eye catches as he moves up the tree. Each pause needs attention. This tree has nice movement, flowing to the left so Jarryd decided that the lines would not change much- no heavy bends, just subtle lines removing straightness where possible but it does need opening up. Where branches need to be removed, Jarryd breaks them rather cutting to achieve a more natural look.

For native trees the structure needs to be built vertically rather than horizontally. Here, the bottom branch will be kept tight to the trunk and the centre branches moved closer together being careful not to create too much negative space between them and the farthest left branch. The right side of the tree will be compacted as the flow is to the left. Jarryd likes to mirror lines and have something in front of the tree, so the viewer has to work to see what’s there. He plans the wiring before starting. 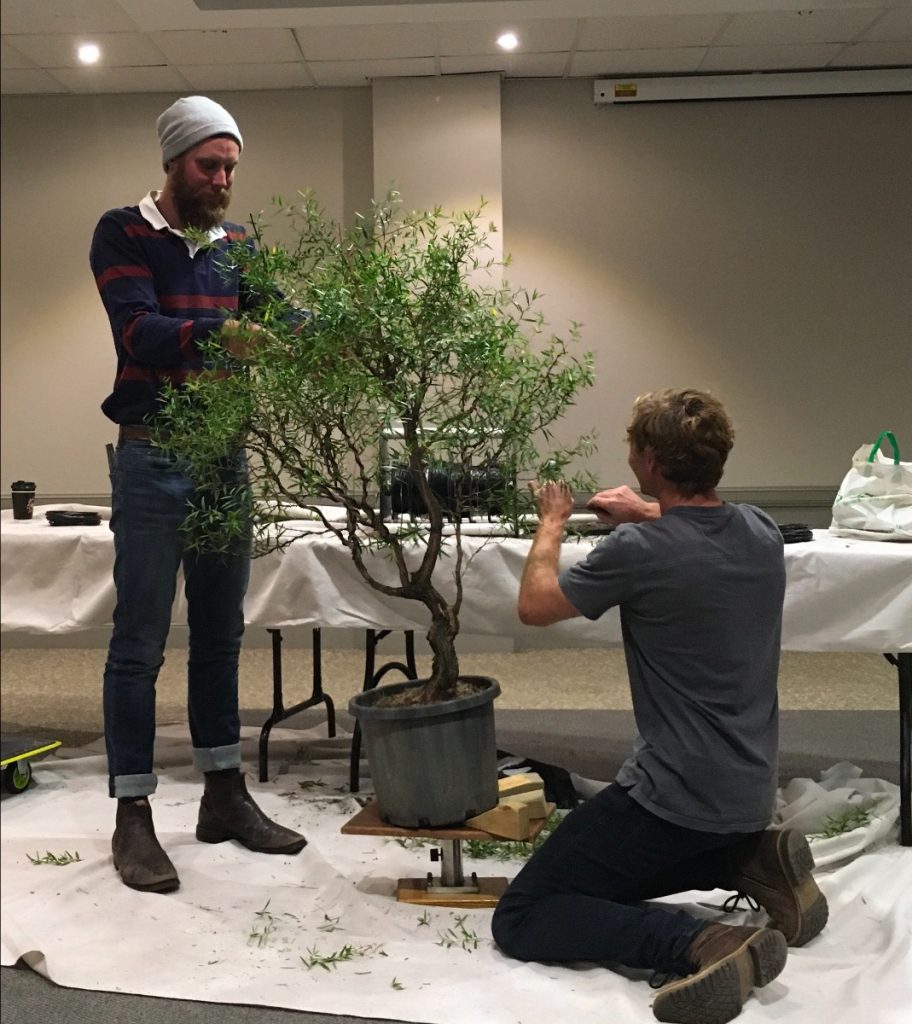 Jarryd prunes every branch that does not have a meristem, as in eucalypts this is usually a sign that the tree will shed this branch. Interior leaf growth is removed to open up the interior and the top of the tree is reduced and thinned out to keep the bottom branches healthy. Jarryd blurs his eyes and compares greennesss- where the leaves appear greener, he thins out.

Finally, he steps back, looks and reassesses to see if maybe there is something better that could be done. His aim is always, as John Naka said, to make his bonsai look like trees and this seems to be the essence of creating bonsai with Australian native species. 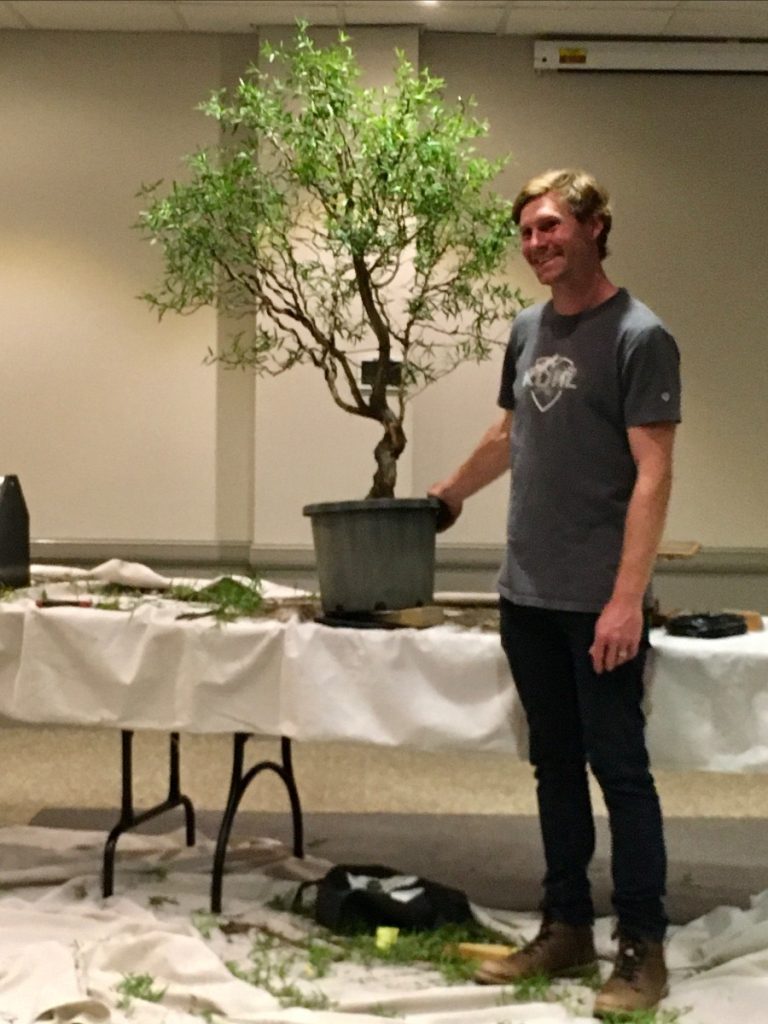