Last month at the BSA meeting, Jarryd Bailey from Montane Bonsai in Tasmania (https://montanebonai.com/) used a Podocarpus lawrencei he propagated in 2014, a stone slab from Tree Makers Bonsai (https://treemakers.com.au/) and rocks from his home creek to create a landscape reminiscent of the habitat where this Australian native grows. Jarryd thinks it is ‘the star of the Australian conifer world’ and expects it will be widely used in the future.

Podocarpus lawrencei or the Mountain Plum Pine is a sub alpine/ alpine evergreen shrub that is widespread in the mountains of SE Australia and Tasmania at elevations of 1,100-2,030 metres. It grows on scree slopes, rocky plateaus and ridges formed by acidic rock types like granite, where it creeps in amongst the boulders to create wind-shadow trees. The boulders provide warmth and protect the tree from the harsh elements. In higher elevations, it becomes a dwarf shrub wider than tall but in lower wet sclerophyll forests it can grow to 15 metres.

P.lawrencei is ‘amazingly flexible’ and is grown with multiple lines and twists that provide many branch and deadwood choices for the future and to make a ‘wildly contorted tree’ reflecting the form of the boulders where it naturally grows. It is a strong growing species that sends out runners each year and buds back well even if there is no foliage present on the branch. The internodes are very short, and it buds from most nodes. Wiring starts at around 2-3 years. Jarryd prefers the blue form which he believes is faster growing than the greener variety. 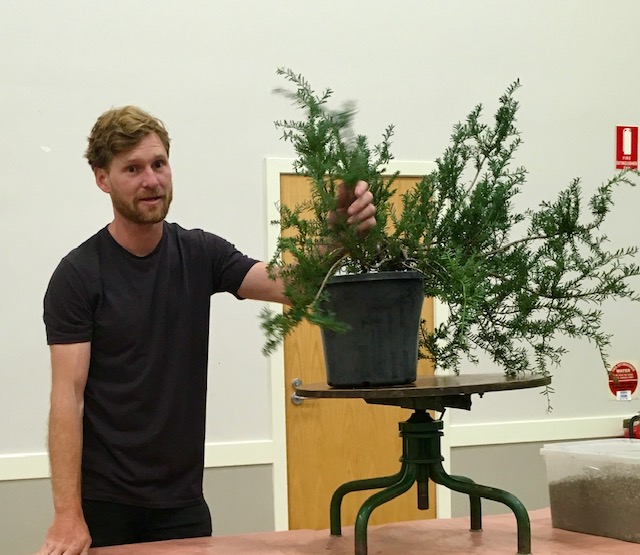 Jarryd’s aim for this demonstration was to create a rambling design to suggest an alpine situation using a thin slab (so it doesn’t compete with the tree) and collected stones. These were chosen carefully to have similar geological characteristics and no new chips. The stones also had to be able to fit together. Here, clay was used to hold everything together because of the time constraints but ideally, landscaping silicone which is non-toxic would be a better choice.

As with all demonstrations, Jarryd started with the question of what to use and what to lose. The design must work aesthetically as well as horticulturally so the first step is to clean up the tree and then look at it from various angles to see what’s going on, what can be used for the design- the more lines a tree has, the harder it is to make a harmonious whole. Jarryd keeps the pieces that were previously wired for the deadwood in preference to straight little stubs. 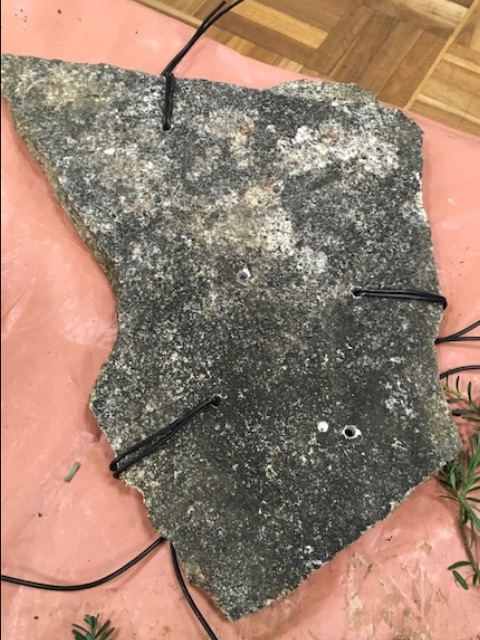 Before removing the tree from its pot Jarryd prepared the slab which was already drilled. (Thanks to Hugh Grant at Tree Makers for drilling and delivering the slab at short notice.) He chose the best aspect of the slab and the placed the pins or tie downs carefully, orienting them to face the viewer so they didn’t compete visually with what was above. Three pins were prepared but only two were necessary to attach the tree. The pins also act as little feet for the slab.

Next, Jarryd placed the rocks to create height and secured them with the clay he had brought from his garden but muck could also have be used.

Muck is a great tool as it allows a design to move from the horizontal plain, opening-up a magnitude of opportunities. Jarryd likes to play with height in his designs. For bigger plantings, he uses a wire cage to plant in, surrounds it in muck and attaches moss and ferns- a bit like a bonsai/ kusamono combination! 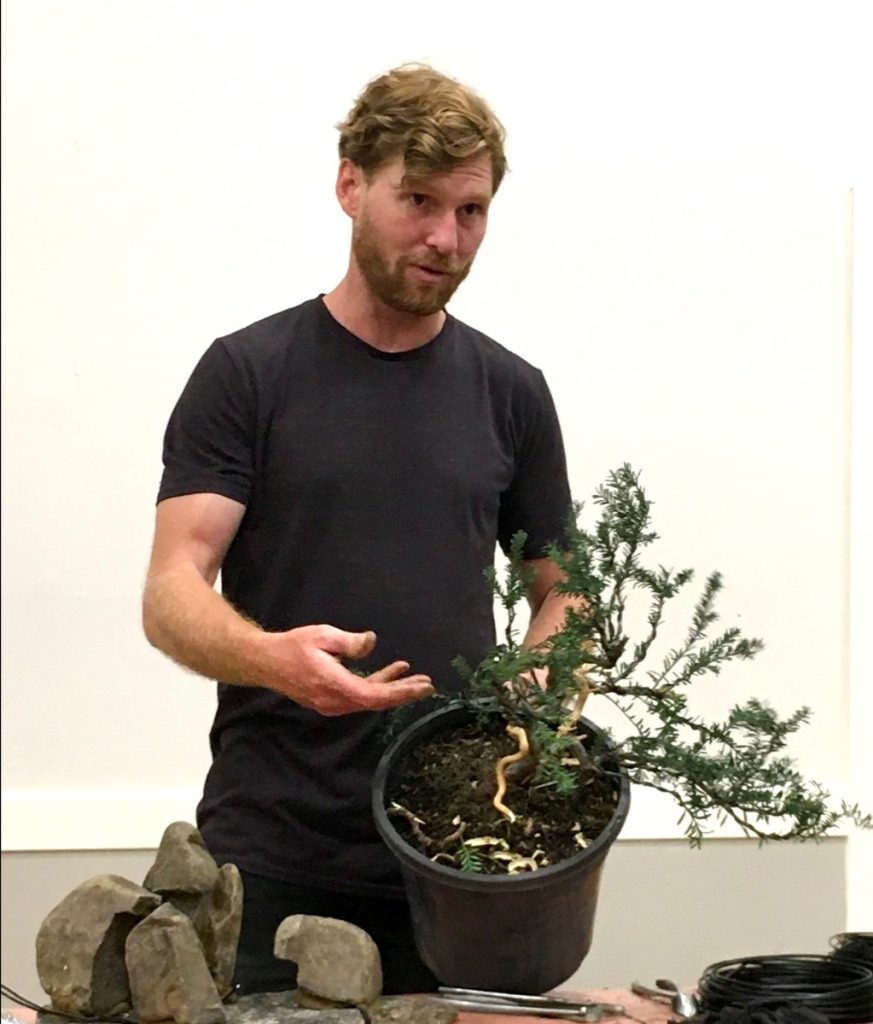 Jarryd is looking for harmony, so he removed one main line and created the deadwood removing the cambium tissue straight away. It saves a lot of time later, if done now. With ‘the chaos’ lessened, he wired the main lines.

He then removed the tree from the pot and teased away the roots. During spring and autumn, the roots can be worked fairly aggressively so Jarryd was able to remove about three quarters of the root ball. A tree with a well-managed root system when repotted doesn’t need a lot of soil mass, however the front rock had to be moved to allow more room for the roots and the tree was then placed and tied in.

Thick clay walls were built by making fat sausages and then placing them between the rocks to create walls; Jarryd thinks about the natural situation and the forces acting upon it when moulding the clay walls. Any gaps were filled with soil (a 1:1:1 mixture of akadama, scoria and pumice was used) and tamped in. The walls were mossed up. Lastly, the smaller branches wired to provoke the idea of a tree hunkering down in the prevailing winds. 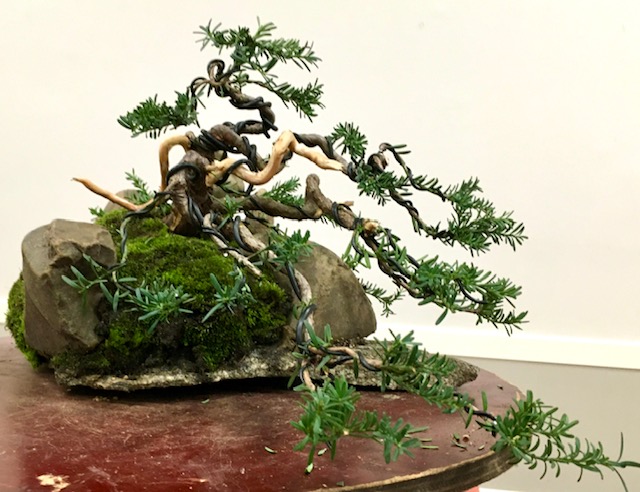 Thank you so much Jarryd for packing your luggage full of rocks and clay to make this a most enjoyable and memorable demonstration.