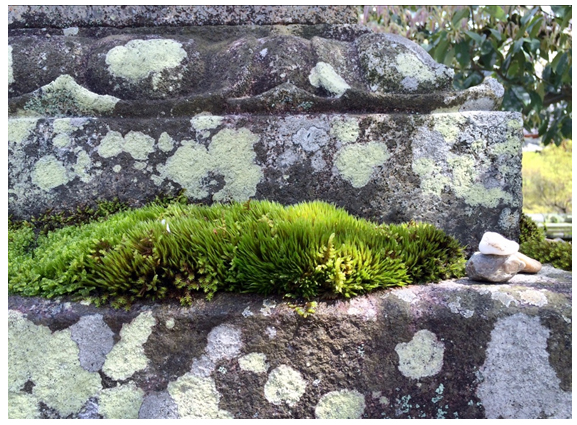 Well known for her very beautiful kusamono and kokodama, Young Choe has a deep interest in moss and is a member of a moss identification group along with Zach Stanley, a bryologist from the Pacific Bonsai Museum. In this workshop, she and Zach explained mosses, their identification, collection and cultivation. It was most interesting, even if it meant getting up at 4.30am to participate!

Young Choe explained that moss is a valuable companion to bonsai and kusamono. Aesthetically, moss makes a bonsai look ‘natural and beautiful’, but it also has practical uses- moss aids water retention, protects soil from erosion and increases the soil quality through micro-organisms and beneficial insects. 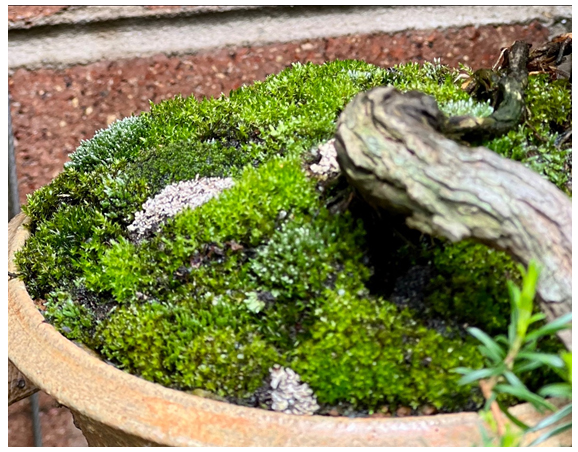 Moss is fascinating. It is one of the first known terrestrial plants, it still retains a lifecycle closely tied to water. Moss is a bryophyte along with liverworts and hornworts which are not mosses. It is a very primitive plant- fossils suggest perhaps 470 million years old. There are over 15,000 species worldwide. The Flora of Australia (Commonwealth of Australia 2006) describes over a thousand Australian species in three volumes. Moss can survive in very inhospitable situations and has spread to every corner of the globe, even Antarctica.

Moss is a non-flowering, slow growing, nonvascular plant that is typically small and stays low to the ground. It has leaves and stems but doesn’t have true roots. Moss leaves are mostly one cell thick and are closely connected to their environment. Moss gets most moisture from the atmosphere, imbibing water in seconds or losing it just as quickly and can dry out in wet soil as its roots are mainly for anchoring. Moss is non-flowering and reproduces from spores.

According to Zach, ‘identifying moss can be relatively easy or quite hard”. The growth habit of the moss is the first clue. It will either be a cushion moss (Acrocarpous) or a carpet moss (Pleurocarpous). Acrocarpous has an upright

growth habit (almost like a miniature conifer), is unbranched and slow growing. Pleurocarpous has a running habit (which creates dense mats or carpets), branches and is faster growing. This is the type of moss that grows up the trunks of bonsai. Pleurocarpous moss is better for kokodama (moss balls).

The second clue for identification is leaf shape- hairlike, lance, ovate or tongue? Where the moss grows is next but by this stage you will need a field guide with an identification key which will make things much clearer!

An article by Andy Bello (National Bonsai and Penjing Museum, Washington D.C.), ‘Collecting Moss and Creating Top Dressing’ was reprinted in the May 2021 BSA newsletter and discussed propagating moss, so it is not necessary to describe the process in detail here. Briefly, collected moss is dried out and then attached debris, like soil and small stones and grit, is removed using a medium sieve. The remaining moss is then rubbed through the sieve and mixed with roughly the same amount of sphagnum moss which has also been grated. This is then sprinkled onto the bonsai soil and misted with water to hold it in place. Interestingly, Zach said that at the Pacific Bonsai Museum, they dye the moss mix with Indian ink so it is not so distracting on the bonsai. Moss collected after rain is easier to harvest.

Young Choe described her ‘Blending Mosses Experiment’ in which she set out to find how best to grow large amounts of moss- something you need when you are a kusamono and moss ball artist regularly conducting workshops! Using a blender (not her kitchen one), she conducted three trials; a cup of chopped moss, a cup of water and half a cup of buttermilk was mixed together in short pulses in the blender and then poured into a tray containing a substrate of half peat and half sand. The process was repeated with beer replacing the buttermilk and then water as control. The trays were then left for several weeks for the moss to grow. was the most successful. Moss likes acidic situations.

While it is not low maintenance (too much water it turns to mould, too little and it desiccates), moss is a beautiful addition to bonsai