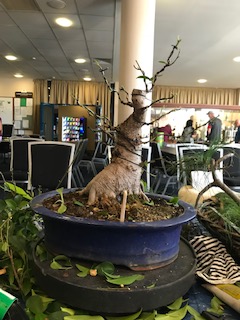 Last month Joe did a demonstration and workshop for Bonsai Central Coast. While it is a bit of a drive to Tumbi Umbi, it is certainly worth it to see Joe in action- his easy way of explaining the how and why of his design decisions makes every demonstration a pleasure. (If you haven’t seen Joe demonstrate, I would really encourage you not miss this Tuesday’s meeting.)

The only thing better than seeing Joe demonstrate is to do a workshop with him. This tiger fig was a tired broom style that had lost its taper and needed serious attention two years ago. In spring 2017, it had all branches, but one, removed and this remaining branch was wired to a more vertical position to become the leader. The fig was then allowed to just grow and regain vigour for twelve months. It was pruned hard again in spring 2018 and let go again. (See photo right.)

Last month the time had come, with Joe’s help, to make some decisions about this tree. First, it was defoliated so its structure was visible- both flaws and features. It was very clear that its taper still had issues so it was decided to reduce the fig further. This immediately improved the taper but also had the advantage of making the trunk appear bigger. Flaw to feature, thank you Joe!
Next the branches were then chosen to set this tree up for the future. Luckily there was plenty to choose from and the decisions were easily made to give this tree direction and balance.

A provisional front (or viewing angle if you prefer) was selected and a new leader chosen to further improve taper with a view to the overall size of the ‘finished’ tree. Structural branches were then chosen, wired and set and although they are quite young and thin, they will quickly thicken up and ramification can be started as soon as this fig sends out new shoots. This should happen quickly as the defoliation happened in mid-February. (Note: it is too late to defoliate in Sydney now.) All that remained was to repot this tree and wait patiently for the frog to turn into a prince.