Ashley chose swamp cypress, five big swamp cypress, for last month’s demonstration and with quite a bit of elbow grease styled them into a large forest setting. Swamp cypress is a species that he enjoys working with due to its fast growth habit and hardiness as a bonsai specimen. Native to the southern states of the USA, Mexico and Guatemala, the swamp cypress (Taxodium distichum) and the pond cypress (taxodium ascendens) grow to thirty-five metres plus in the wild.

Swamp cypress make good bonsai specimens for a number of reasons: they are tough, vigorous growers with good bark and soft needle-like, attractive leaves, trouble free as far as pests are concerned and have good autumn colour in cooler areas. They can be styled as formal uprights, informal uprights, slanting, literati, twin trunk or groups.

Ashley chose five trees ranging in age from two to three and a half years. All were started as tube stock and moved on to eight inch pots after a year and then to twelve inch the following year. Swamp cypress are fast growers and with lots of fertiliser (lots of Osmocote twice yearly in this case) large trunks can be grown in two years. At the nursery, they are grown in a boggy area which resembles the swampy, wet habitat they grow in naturally. (Think Everglades where they grow into giants, live for an unbelievably long time and develop fabulous knees. https://www.mnn.com/earth-matters/wilderness-resources/blogs/scientists-discover-tree-least-2624-years-old). Otherwise they are grown in half drums with no drainage holes and kept quite wet. Ideally, repotting is done in spring when buds extend but these are pretty hardy trees and Ashley doesn’t foresee any problem with creating this forest in the middle of autumn. It will just be a bit slow until spring growth. 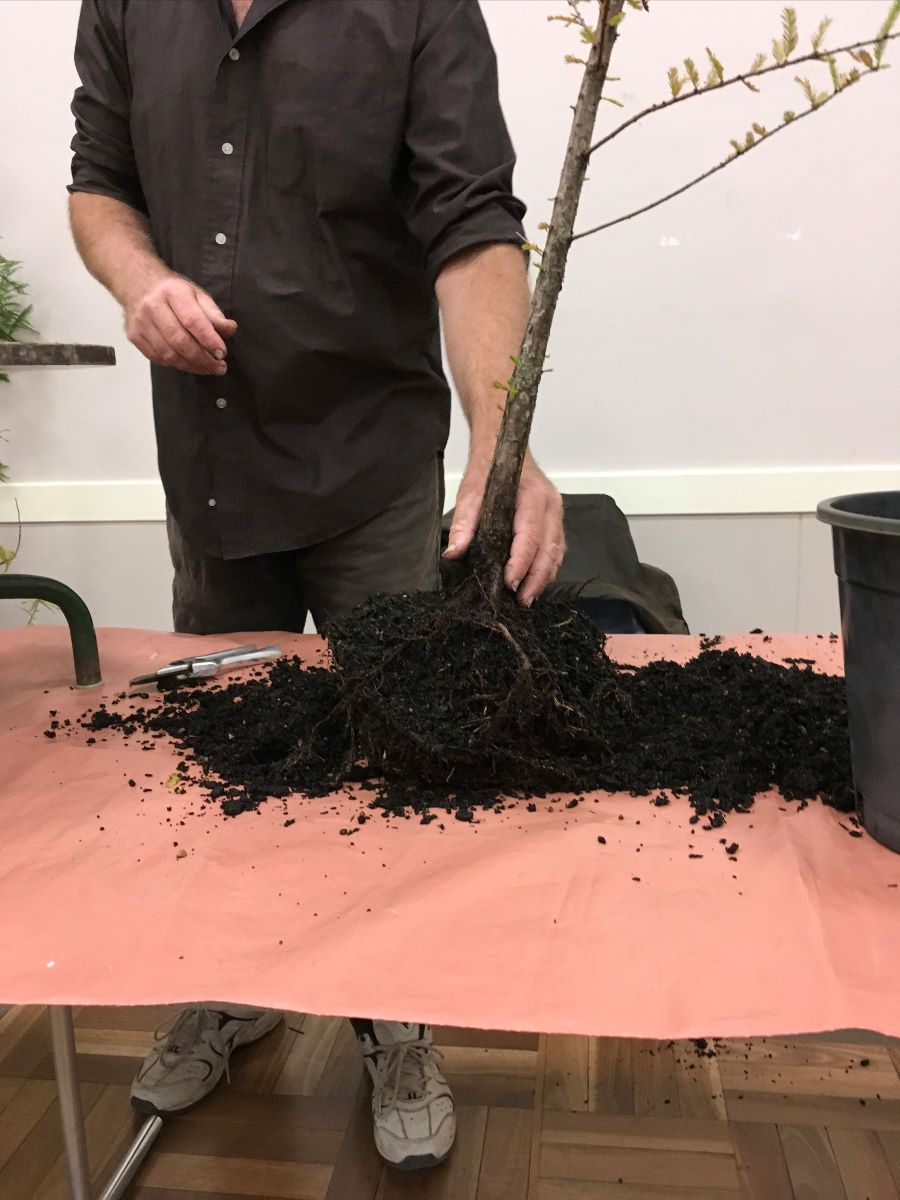 For this forest, Ashley has obviously chosen trees of the same species, with similar bark and movement.

However, one of the trees has more movement than the others and so will have to be carefully placed so it doesn’t look out of place.

Before starting to work Ashley likes to ‘look for something under the soil’- a more interesting layer of roots which he generally finds with swamp cypress. A main feature of this forest will be the interesting roots so he excavates every tree to see what’s there.

As you can see from the photo above, Ashley really reduced the root mass for the first tree saying, ‘You can really be pretty brutal with swamp cypress as they are amongst the fastest growing bonsai around.’ The second tree didn’t have much to offer in the way of roots so it will go to the back or be pressed hard against another tree to disguise this. Because the roots are the main feature, any that offered nothing were cleared away. This tree had some reverse taper but this won’t look unnatural or peculiar in a forest. As this is one of the smaller trees it would usually be placed on the left or right or the back of the setting and so needs to be shallower and quite low and so it has to have very harsh treatment and be reduced by quite a lot, making the roots into a little pancake. 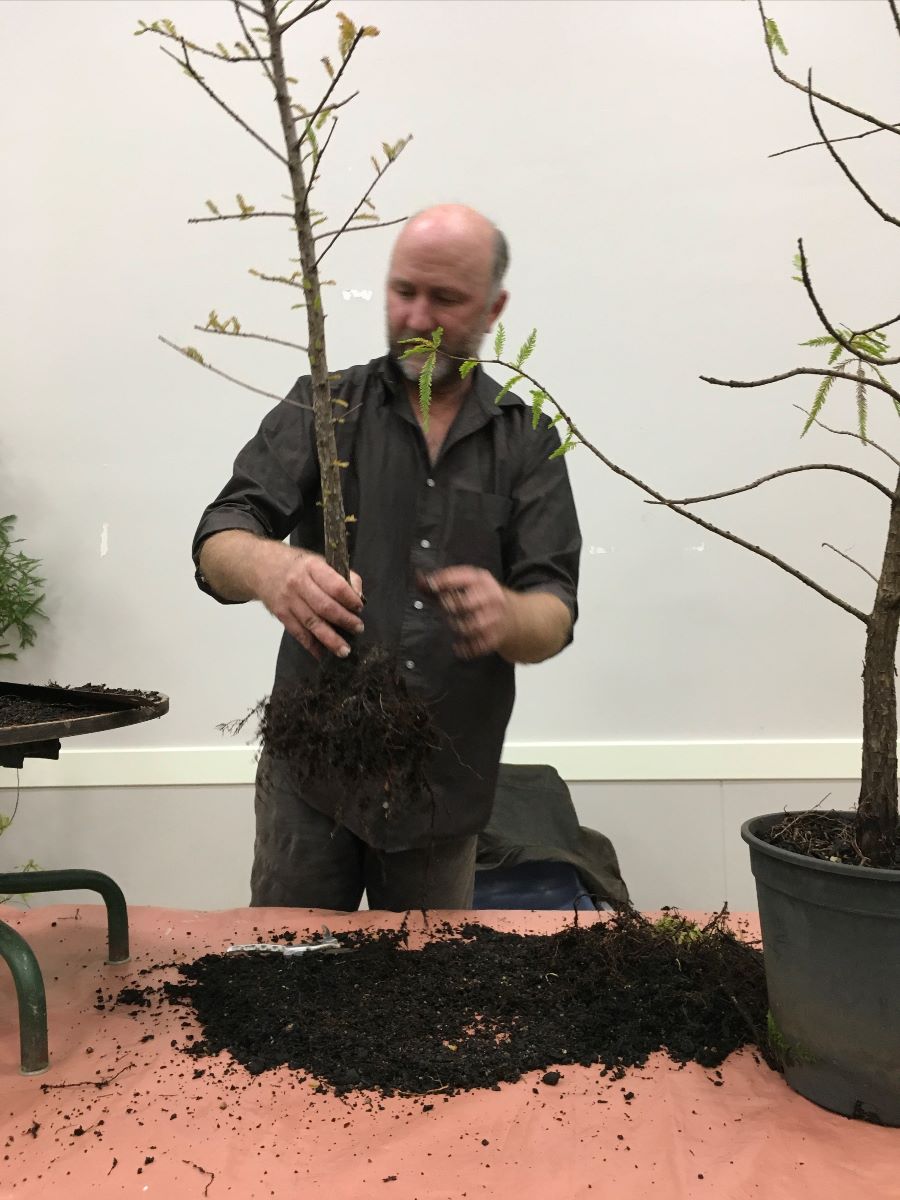 The second tree didn’t have much to offer in the roots so it will go to the back or be pressed hard against another tree to disguise this. Because the roots are the main feature, any that offered nothing were cleared away. This tree had some reverse taper but this won’t look unnatural or peculiar in a forest. As this is one of the smaller trees, it would usually be placed on the left or right or the back of the setting and so needs to be shallower and quite low and so it has to have very harsh treatment and be reduced by quite a lot making the roots into a little pancake.

It’s hard to make a forest look natural. The parent tree is the thickest and would have branches radiating outwards while the smaller trees need to look as if they have seeded there naturally. The smaller trees must have upwards and outward growth towards the light rather than the darkness of the forest. The trees need to be in a ratio- the skinniest tree needs to be the shortest and all the small trees can’t be the same height. 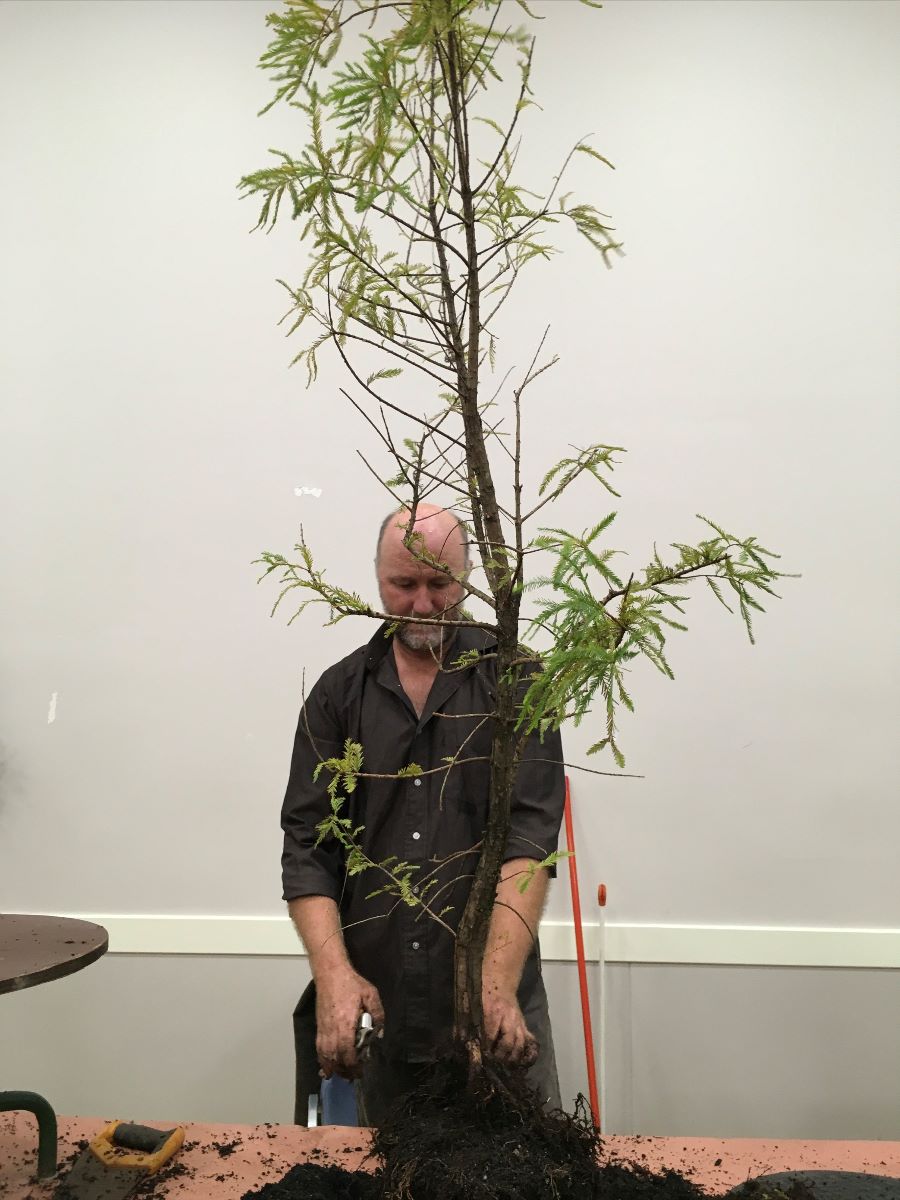 The third tree is the oldest at three and a half years and has been neglected but it has thickened up nicely at the base and has roots coming out of the bottom of the pot. This means that there will be plenty of roots lower down and so Ashley keeps cleaning away the roots from the top looking for something good. He reinforces again and again that swamp cypress can be root pruned really hard and they will respond nicely. Because a forest needs to have the ‘sameness’, Ashley prunes any roots going in a different
direction as the eye would always be drawn to this.

The fourth and fifth trees were prepared in the same way, always looking for strong root structure to support the main feature of this forest.

A shallow pot had been prepared with eight sets of wires for anchoring, as some trees may need more than one set. Ashley felt the trees positioned themselves to show off their roots, which were very beautiful when cleaned out. The wires were twisted by hand firstly and then jin pliers were used to pull the wire and then twist it until each tree was firmly in place. The pot was then filled with soil carefully so the lovely root structure could be seen.

The branches were then set for the time being but the aim is to eventually get rid of the bar branching. Swamp cypress are apically dominant so the tops have to be controlled. The plan for this setting is to let the branches grow out and then in November ‘hack back’ all at once and then let it go for three months and ‘hack back’ again. Losing a lot of foliage at once forces the tree to back bud profusely on the trunk, branches and forks which gives lots of choices for future design.

Finally, the trees were wired with the aim of getting the best silhouette. Branches were picked that could be paired and wired together- all branches needed to be wired for the best result. Young branches are easy to shape but older branches can be brittle. Lowering branches is best done with guy wires if possible. Ashley leaves the wire on until it bites a bit so the branch is set but you do need to be watchful as swamp cypress grow so quickly. 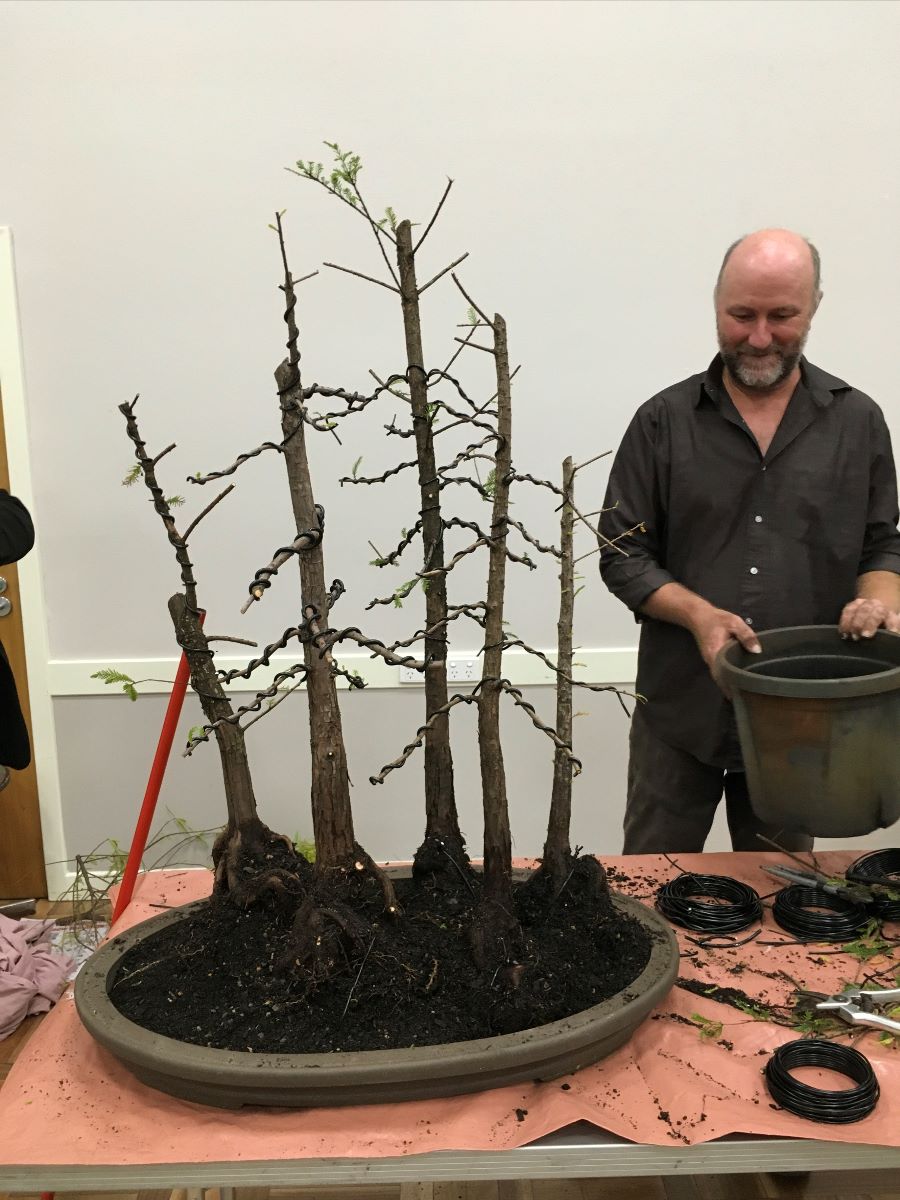 Aftercare will be a wet, humid, shady position (perhaps it will go into an igloo) initially and eventually back into full sun.

The trick for this setting, as with all bonsai, will be to eliminate any flaws over time.