For Peter’s demonstration, Ian brought a mature, well-styled cascade juniper that Peter described as ‘enjoying life in captivity’. It was, however, ready for a makeover! 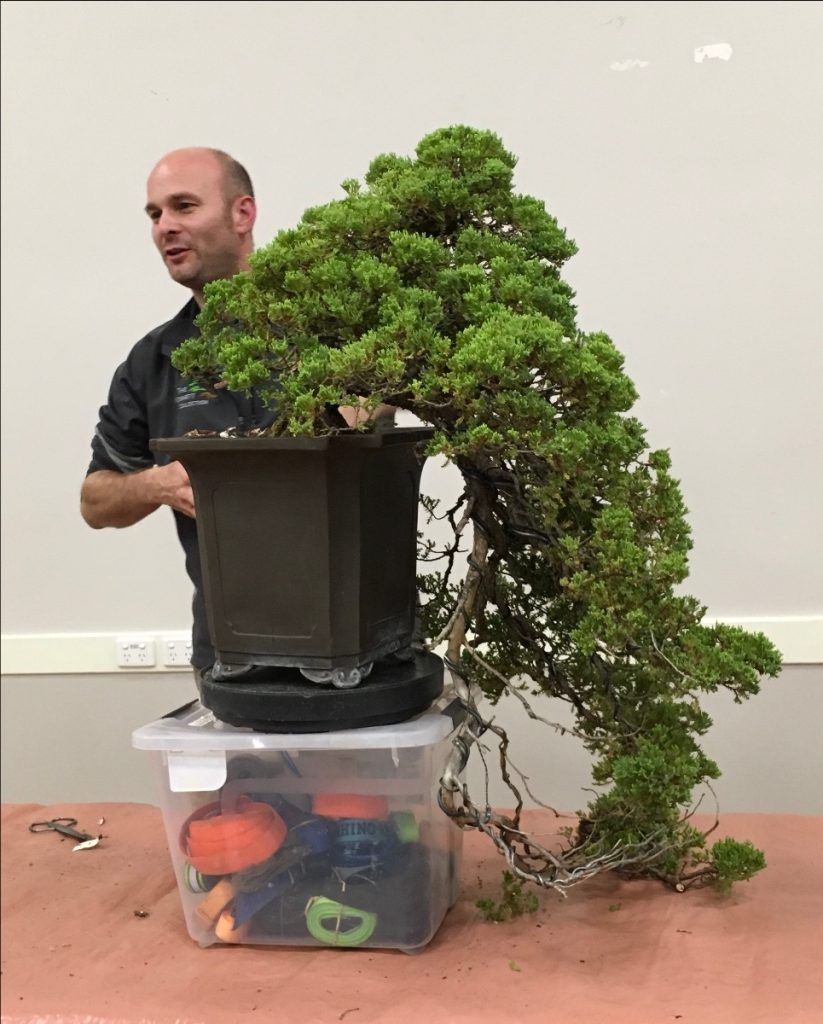 To start, Peter opened up the trunk line by jinning the bottom branch and worked through the tree cleaning it out, explaining that this was not just a ‘branch job’ but a time to consider such things as:

A getting to know the tree which revealed that the tree had not been cut hard for several months and was starting to develop its mature foliage. A desirable situation from both a horticultural and design point of view. However, there were some weaker areas due to lack of sunlight and these exhibited juvenile foliage.

Juniper are foliar driven plants. ‘Everything revolves around the foliage’ and problems mainly come from its management. The tree wants green, it needs its solar panels. Too hard pruning weakens the tree and its response is the high risk/ high return juvenile foliage.

Peter suggested using a ‘scientific gaze’ to look at the energy within the tree. Pruning results in an energy deficient situation so the tree becomes stressed or weakened and looks for a high risk/ high return strategy to deal with the crisis. Juvenile foliage has a larger surface area than mature foliage and so gives the tree a better return- more energy available from more photosynthesis. Juvenile foliage however is high risk because it doesn’t have as much structural integrity and so is easier to pull off or damage, loses more water to the atmosphere and is more susceptible to scale and fungal infection.

To avoid this stress to the tree, Peter suggests approaching foliar management in a softer way- taking small steps forward rather than cutting hard and setting the tree back for at least two years. ‘Little and often’ is the solution but he stresses that the right kind of foliage should be removed. Free-loading foliage that is not doing much for the tree overall should go and the tips (the most important part of the tree) should remain. 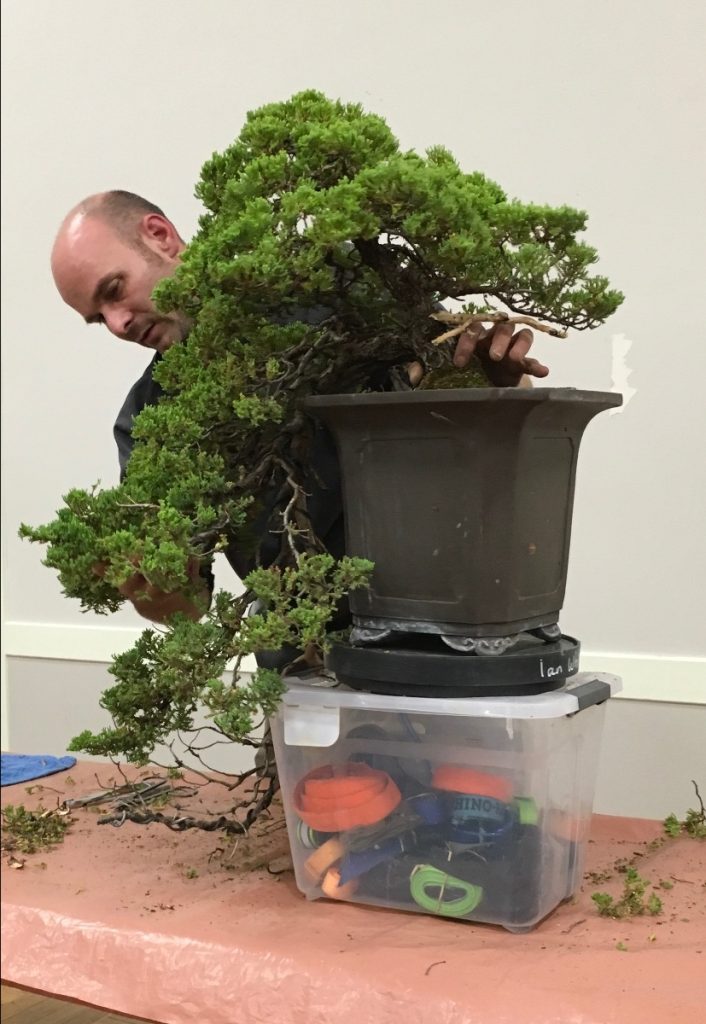 The scrappy lowest branch of the cascade was a candidate for removal as it was doing little to enhance the tree.

This juniper is a classic Japanese design and so needs to keep going with what has historically happened, but it also needs to be moved to its next iteration. Peter looked at the line of the cascade and suggested removing the lower branches to draw attention to and keep interest in the tree’s flow and its trunk. The lowest branches were ‘not so flash’, all moving to the left rather than the ideal of left and right, but this was a decision for later. For the time being, Peter removed the lowest part of the cascade as it was going towards the back of the tree and did not engage the viewer. He noted that the tail does not need to come towards the front but must always engage the viewer.

The next question to be answered was: ‘Does the bottom branch add to the tree?’ Over time, it would eventually become deadwood but for now the viewer needs to be focused on the trunk, the foliage pads and the tree’s movement and so, for now, all ‘the green bits’ need to be kept. The long jin was snapped off to improve the balance of the tree and Peter suggested that the dead vein could be sharied to accentuate what is already there, without drawing the eye from the live part of the tree. Over time, the top section of the tree will swell more and more and the bottom will shrink, so long term thinking should be part of the plan. 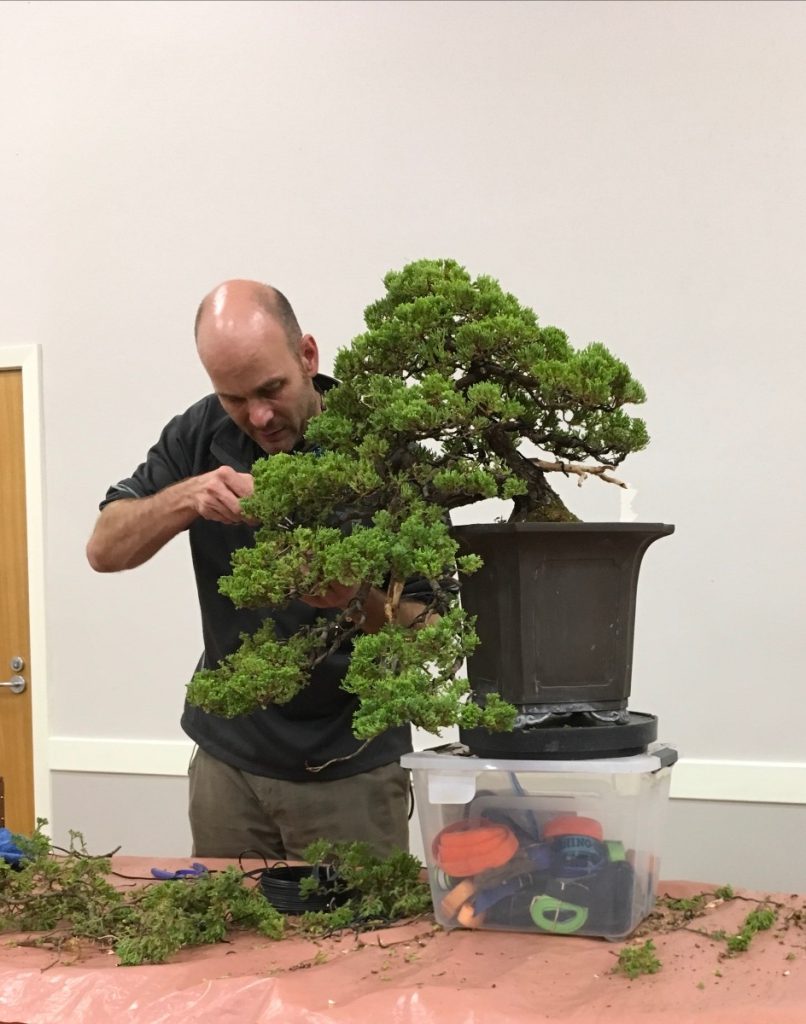 At this point, it was back to the foliage and the second layer branching structure which in juniper is the engine of the tree. The engine analogy works well for juniper. A happy, healthy tree is travelling in fifth gear but if the tree is pruned too hard, it is like changing straight to first gear and the engine is ruined. When pruning, we want to change the tree’s gears gradually, from fifth to fourth, so pruning should be done a little at a time and often. In an ideal world, do some every day or every other day, that is, small minor prunings very often. This is what brings a juniper to the next stage, not pruning it too hard and stalling the engine.

Juniper prostrata’s growth habit is easily utilised to create the stereotypical juniper bonsai as they produce long shoots that grow out in straight lines. Up/ down, left/ right creates a very nice foliage pad rather than unnatural or artificial manipulations. Trees with too much twisting etc. do not move forward well.

This tree has been skilfully built and so will go forward easily. Old and inefficient branches need to be removed in favour of young branches. As older branches lignify or harden, they do not carry water and nutrients as well as youthful branches and so thinning out, to a certain extent, will keep the tree growing happily and healthily. When thinning out tertiary branches, remove the oldest, particularly when there are three branches at a junction. ‘Take from the strong and give to the weak’ to achieve balance within the tree.

At this point, Peter pointed out good trees have good roots. The top of the tree is a mirror image of what is happening in the roots- coarse roots will give coarse foliage and vice versa so attention to the root zone is important. For juniper, Peter uses a mix of small Akadama, pumice and scoria. Young trees need to be repotted on a regular basis to control root growth but for older trees only repot when necessary. If a tree is healthy and water is filtering through then it is not necessary to repot. Refreshing the top layer of soil is sufficient. Repotting is the most enjoyable and exciting part of the work for Peter.

Finally, the foliage pads were adjusted, paying attention to line, space and form. Create foliage pads by wiring the first and second branches and then prune the tertiary branches. Let the canopy fill out and prune gently, allow it to fill out again and prune again and so on. Clean the bottom of the pads and point them slightly upwards. The more consistency in foliage, the more harmonious the tree appears. Too much foliage creates chaos. 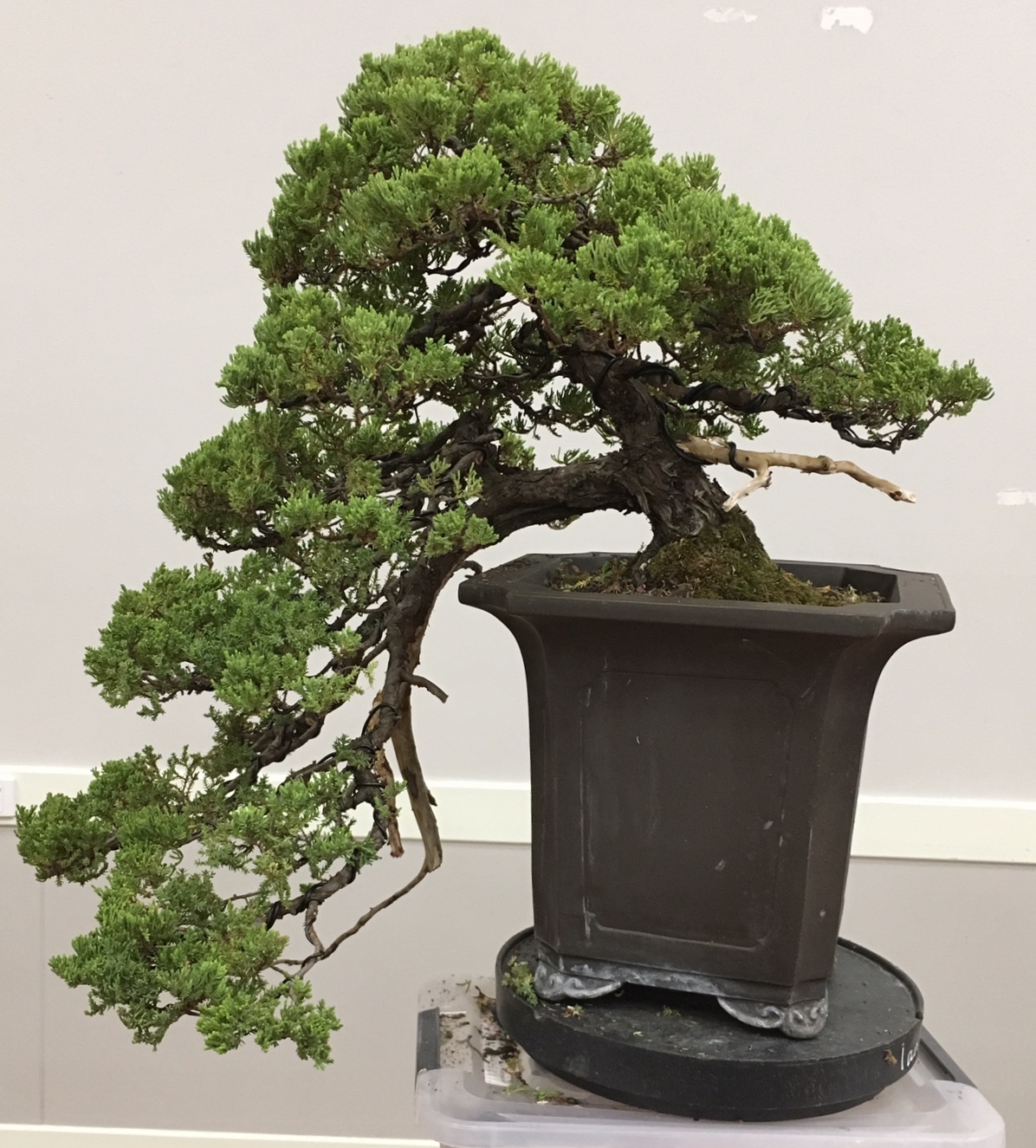 The beautiful finished (for now) result.