Things to do in December 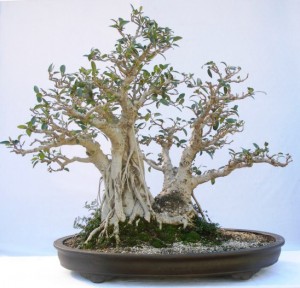 December is a slightly quieter time for bonsai tasks than other months. However, spring growth will continue and one must be mindful of keeping vigor-ous tree trimmed to encourage short internodes. Fast growing trees can be trimmed back to two leaves whilst less vigorous to four leaves.

Continue to monitor candle growth on your Black Pines, which can vary considerably from tree to tree and even within the same tree. When the majority of candles have elongated pinch back to 3 to 5 mm.If more than one candle has developed on a branch leave two of similar growth and remove the rest. This will encourage future branching. Also older needles can be thinned particularly those facing straight up or down on a branch.

Remove spent flowers from flowering trees to promote further growth. Re-member though to leave flowers on fruiting or berry producing tree such as Cotoneaster, Crabapples or Pyracantha to although the fruit to form. Australian natives can be pruned relatively hard after flowering. Conifers can be pinched out at this time to encourage back budding and denser foliage growth on branches.

Wiring can still be done but try not to wire tightly as the trees are still growing relatively strongly and may suffer wire marks if not properly supervised.

Be diligent with watering and try to saturate the soil to encourage a wider and deeper spread of roots therefore making the plant more drought tolerant. Try to avoid watering late in the day to avoid wet foliage overnight as this may encourage mildew or black spot. However, it is a good idea to spray foliage in the morning to clean the leaves of dirt and pollution and discourage some pests.

Figs are in their element at this time of year and you make start repotting, defoliating and prun-ing. Large leaves can be cut off and new growth pinched out. When pruning figs it is a good idea to spray the milky sap with water to prevent the sap leaving stains on trunk and branches. Overgrown figs can be pruned back very hard but it is a good idea to repot at the same time and add a good measure of fertiliser to your mix. Figs also like a porous soil as they can be prone to rot if the soil is not well drained.