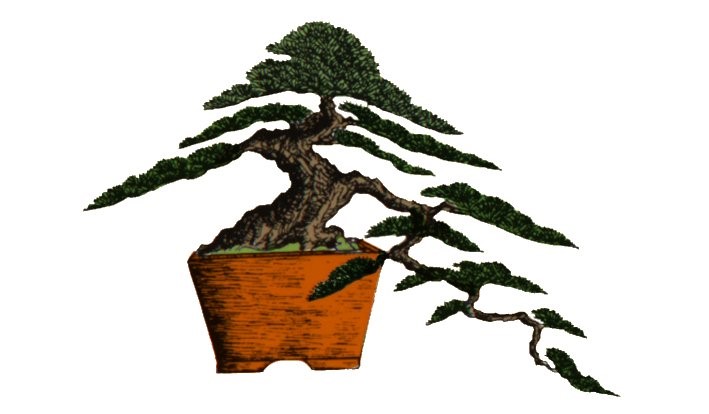 A problem that I first became aware of was shown to me in New Zealand some years ago, and has mystified bonsai growers in some areas in Australia for some time now. I came across the solution to the affliction whilst researching a species. This particular problem occurs with the Juniperus cultivars and in particular the Juniperus procumbens Nana and possibly J. squamata Prostrata.The problem shows up on the crown only as distinct to another blight afflicting the entire plant, but that will be next months tip. This particular nasty is called Phomopsis juniperovora, which causes the crown area only; to slowly, very slowly deteriorate.

Without treatment I suppose the crown will eventually and totally die. The tips become weaker & weaker and no amount of foliar feeding can improve the condition. The solution can be a problem though, because the fungicide Benlate was withdrawn from the general market following a huge lawsuit. The product has reappeared but can be sold only in 1-kilo lots at an expensive cost. Unfortunately it is the only fungicide available that will work. Now at least you know the name and what it does. If you have the problem it will cost you.

Soft new growth on our bonsai in spring is an inviting target for aphids. They are accompanied by ants who ‘milk’ the aphids for their succulent sweet secretions. The spillage ‘grows’ the sooty mould, which causes the dermis (bark) and leaves to be coated by a dark furry mould.The ants and aphids must be eliminated before tackling the mould. A mild insecticide such as pyrethrum is usually sufficient. Certainly no household ant insecticide such as borax should be uses on plants.

Subsequently, spraying or brushing with an old toothbrush with a mild un-scented laundry soap can eliminate the mould. Alternatively use a fungicide to treat the sooty mould.