Clinton choose a neglected literati Juniper procumbens that had been languishing in the back of the nursery without much attention for some time and needed ‘a new style for the New Year!’

Literati trees are very different from fuller style bonsai. Their environment dictates how they grow and reflects their struggle to survive in harsh conditions as they reach towards the light. The trunk, tall, curved and with very little taper is the essence of this style. Literati trees have more deadwood, less branching (that should start two thirds of the way up the trunk) and smaller foliage pads. Clinton recommends looking at lots and lots of different literati images to see what appeals to you as it is a very expressive style and hard to give advice on. 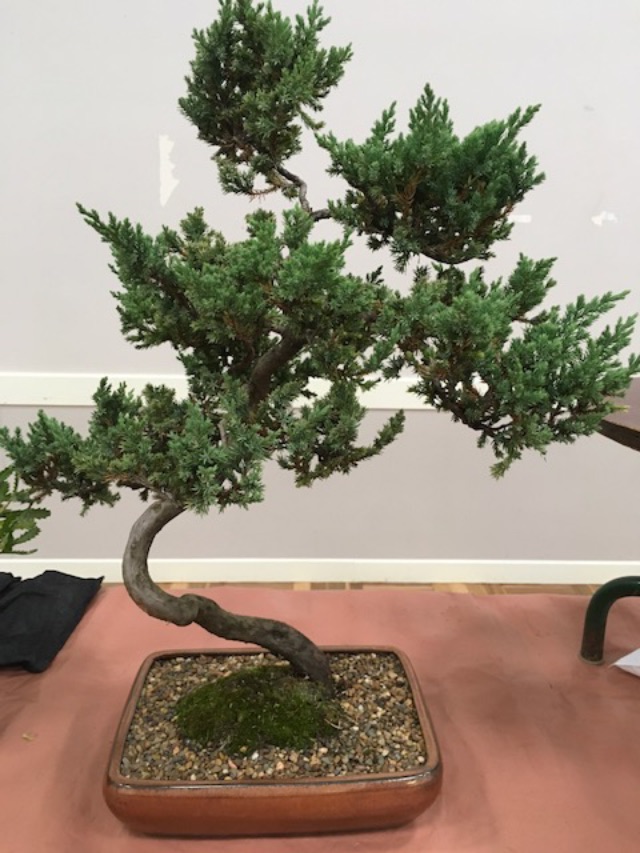 Neglected juniper, ready for a change.

As always, Clinton began by looking at the features and flaws of the tree. The trunk, definitely a positive feature, had a good bend but Clinton thought it could be more dramatic- stronger movement would create stronger interest. 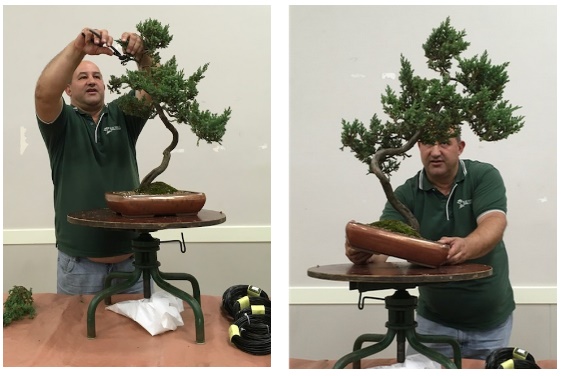 thBy changing the front/ viewing angle and slightly tilting the tree, the movement was improved suggesting ‘a snake ready to pounce’ and also made use of a small shari that had been at the back of the tree.

The branching was good but needed to be more in proportion with the composition- there was far too much foliage to reflect the struggle inherent in this style. As Clinton did not like the heavier top branches, his plan was to use the second branch as the crown, keep some of the branching at the back, something to balance on the left hand side and some more for insurance.

The main exercise of this restyle was to get the bones set up and then look at the foliage pads, which in this size tree, should be small and have more space in relation to each other- too much foliage takes away from the design.

Clinton had thought about what he was going to do, so started by ‘cleaning up’ the branches he intended to keep to make wiring easier later. Anything going down, too high or growing between the branches was removed. Some unnecessary branches to the design were removed but not all and all the foliage trimmed from the apex. Next Clinton thinned out the foliage pads so the tree’s structure was visible before began wiring.

As this tree has had branches set in the past, Clinton took particular care when wiring the branch he wanted to raise, being mindful of ‘what’s possible and what’s not’. Using 3mm wire, he partnered it to the lowest branch (leaving extra space so he could double the wire to get better coverage and control) to the one to be raised and made sure to bring the wire under the shoulder of the branch to support the upward movement. 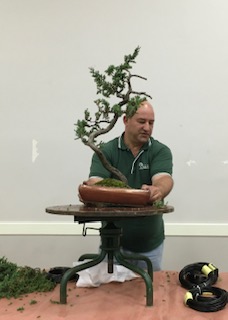 The new leader was gradually moved upwards using the wire rather than the branch, and care was taken to brace the weaker points. Once the branch was positioned, it was thinned out more. The apex was moved forward, but only a little, as ‘too much hello is not good’.

The tree was still too tall, so the leader was bent back some more but more was needed. The tree would be better shorter. Should the lower branch be used and the top removed? 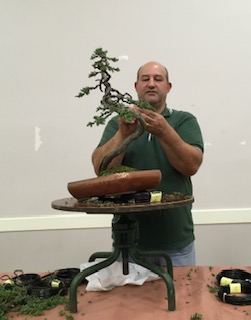 The decision was made to jin the top of the tree and go with the smaller lower branch as the apex. Creating the jin now, while the sap is still flowing saves time and effort later. (Final decisions about deadwood can be made later as it is very much a matter of personal taste.)

The tree was much more balanced now the heavy foliage had been removed. The aim was to leave enough foliage to give balance and fullness but not thickness. Not too
sparse but tight enough to make the trunk look more dominant and create an overall pleasing image which I am sure you would agree, Clinton achieved admirably. 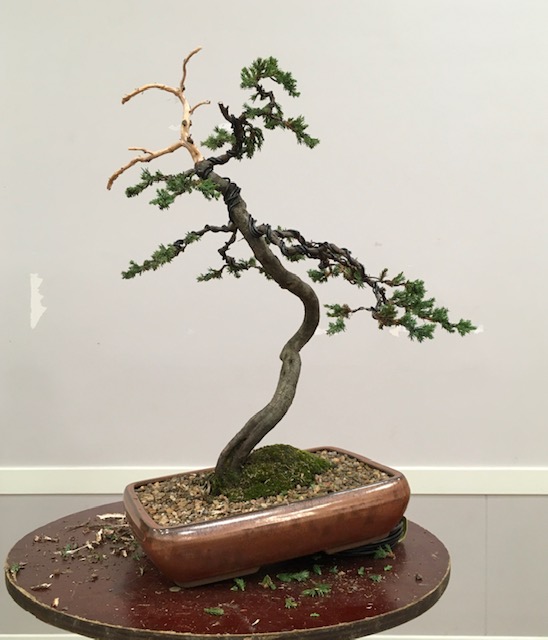